“We struck at Guadalcanal to halt the advance of the Japanese.  We did not know how strong he was, nor did we know his plans.  We knew only that he was moving down the island chain and that he had to be stopped. We were as well-trained and as well-armed as time and our peacetime experience allowed us to be.  We needed combat to tell us how effective our training, our doctrines, and our weapons had been.  We tested them against the enemy and found that they worked.  From that moment in 1942, the tide turned and the Japanese never again advanced.”

In the summer of 1941, the American people were horrified by the unfolding war in Europe.  They were equally horrified by the idea that the United States might, in some way, become involved.  The American people had already sent their loved ones off to die in Europe; few Americans wanted to see this happen again.  President Franklin D. Roosevelt, on the other hand, strongly believed that the United States had an obligation to stand up to the emerging Axis powers —but he was also an astute politician who knew better than to ignore the mood of the American people who preferred isolationism to the horrors of war. Involving the United States in another world war would end his presidency and destroy his legacy.

No, Mr. Roosevelt realized early on that the only way the United States could join forces against the Axis powers was that if one or more of its members launched an attack upon the United States of America.  Germany focused its belligerence on its immediate neighbors and Eastern Europe. Mussolini’s Italy confined its military activities to interventions in Spain, Albania, Ethiopia, Egypt, and Palestine. If an attack against the United States should come, it would have to come from Japan, whose growing naval and military power had unfettered access to America’s lightly-defended and far-flung Pacific bases.  Roosevelt did everything in his power to encourage a Japanese attack on US advanced bases.  He imagined that Japan’s attack would target the Philippines (which it did), but he did not think Japan would strike Hawaii.

Franklin D. Roosevelt got his war on 7 December 1941 when the Empire of Japan assaulted the United States Navy Base on the island of Honolulu.

After Japan’s surprise attack, the United Kingdom and United States agreed to concentrate first upon the defeat of Germany; war with Japan would occupy a second priority. Initially, this policy forced America’s Pacific area military commanders to confront the Japanese on Japan’s terms. Most of America’s naval power lay at the bottom of Pearl Harbor, Hawaii on 8 December 1941.

Consequently, Imperial Japanese forces swept through Northeast Asia, East Asia, Southeast Asia, and much of Melanesia during the first six months of 1942.  They were able to accomplish these feats through careful planning over many years, initiative, and surprise [1].  Allied personnel and advanced bases at Wake Island, Guam, Singapore, Bataan and Corregidor, and the Netherlands East Indies were at great risk.  The Japanese seized Rabaul on 23 January 1942, and Bougainville in the Northern Solomon Islands in April.  At the end of Japan’s line down the Solomon Islands was the British port of Tulagi and a (then) little known island called Guadalcanal.  A few British and Australian riflemen were all that defended Tulagi; they were no match for the 3rd Kure Special Naval Landing Force assault on 1 May 1942.  The only check on the Japanese advance at Tulagi came when United States Navy Admiral Fletcher, Commanding Task Force 17, sent his aircraft against Japanese shipping in Tulagi Harbor, sinking the destroyer Kikutsuki, damaging the destroyer Yuzuki, and offering some damage to the cruiser-mine-layer Okinoshima [2].  The Pacific islands were particularly important to the Japanese because they intended to deny America supply lines and communications with Australia and New Zealand.  Japan was in undisputed possession of the Solomon Islands.

American and Japanese naval forces clashed on 7-8 May 1942 in the Coral Sea.  It was no outright victory for the Americans, who lost the carrier USS Lexington, but the Japanese lost the light carrier Shoho, 80 planes, and suffered substantial damage to the fleet carrier Shokaku.  If the battle had one significant outcome, it was the forestalled Japanese invasion of Port Moresby and South Papua.

Between 4-7 July 1942, American and Japanese naval forces clashed once more, approximately 150 miles northwest of Midway Atoll.  Japan’s carrier-based air power of their combined fleet was virtually annihilated. The Americans sank four Japanese carriers: Kaga, Akagi, Soryu, and Hiryu —along with the cruiser Mikumaand more than 250 Japanese aircraft.  Perhaps more important than the loss of ships, the Japanese also lost their experienced crews and pilots and the practiced and coordinated teams and organizations formed over many pre-war years.  It was a terrible blow to the Imperial Japanese Navy. After Midway, the time was ripe for initiating a more aggressive stance toward the Japanese. 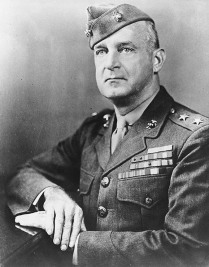 On 29 June 1942, Major General Alexander A. Vandegrift received a warning order: prepare the 1st Marine Division for an amphibious assault.  He wasn’t told where.  While he set about training the division for combat, the Department of War exchanged terse messages with General MacArthur and Admiral Ghormley [3].  Roosevelt wanted his Pacific commanders to seize the initiative, attack the Japanese, and do so promptly.  MacArthur and Ghormley answered “Yes sir, as soon as you give us adequate resources.” Vandergrift’s 1st Marine Division began its incremental move to New Zealand in mid-June, but it was far from its war time strength.  In fact, all Marine Corps units were under-strength and widely dispersed throughout the Pacific region either as provisional brigades or separate defense battalions.  Naval and air forces were not much better off, and these circumstances necessitated the sharing of assets between and among theater, area, and task-force commanders.

It was a hectic time for the Americans, but more so for the Empire of Japan.  Midway was a strategic victory for the Americans, but Japan did not realize this until many months later when Japanese military commanders awoke one morning to discover that they were fighting a defensive war in their own home islands.  Japan’s brash decision-making handed them horrific losses in both material and personnel —and the Americans marched steadily toward execution of Operation Watchtower.

Driving the US strategy in the Solomon Islands were several reports from air reconnaissance assets and coast-watchers that, in addition to its seaplane base in Tulagi, the Japanese intended to construct an airfield on the Lunga Plains of Guadalcanal.  From this location, it would be possible for Japanese long-range bombers to threaten the sea lanes between California and Australia and defend its major base at Rabaul.  Nine-hundred naval infantry defended Tulagi; 3,000 laborers were set to work on Guadalcanal.

On D-Day, most Marines going ashore carried the M1903 Springfield (bolt-action) rifle and ten days of ammunition.  The landing force had 60 days’ worth of supplies; they needed 90, but naval planners had reduced their logistical footprint in order to speed up the time-table for the landing [5].  Bad weather (storms and heavy seas) permitted the Allied Expedition to arrive off the coast of Guadalcanal at night on 6 August 1942 unseen by the Japanese.  The next morning, allied ships and aircraft began bombarding shore lines and Japanese positions.  The landing force went ashore in two groups: one assaulting Guadalcanal and the other the Tulagi and Florida Islands.  Three-thousand Marines assaulted Tulagi and two nearby smaller islands named Gavutu and Tanambogo.  The Marines achieved all their objectives by 9 August, killing all Japanese defenders in the process.  The Marines suffered the loss of 122 brave men.

The Marines assaulting Guadalcanal experienced scant resistance.  Eleven-thousand Marines of the 1st Marine Division went ashore at 0910 on 7 August, landing between Koli Point and Lunga Point.  They secured the airfield by 1600 on 8 August.  Japanese naval construction troops and laborers serving under Captain Kanae Monzen withdrew 3-miles west of the Matanikau River in the face of allied bombing and the advancing Marines.  The Japanese had abandoned their food, supplies, construction equipment, motorized vehicles, and thirteen dead.

Admiral Fletcher became concerned about the safety of his task force: the threat of Japanese navy counter-attack was real, his ships were low on fuel, and his ships were sitting-ducks to Japanese aircraft and submarines.  Losing 14 carrier-based aircraft meant that Fletcher had less air cover.  Admiral Turner decided to withdraw his amphibious shipping even though less than half of the supplies and equipment needed by the Marines had been off-loaded. The Marines would suffer mightily as a result of this decision.

The transports continued to unload equipment during the night of 8-9 August.  Two naval groups screening Allied shipping under British Rear Admiral Victor Crutchley VC were surprised and defeated by a Japanese naval force of seven cruisers and one destroyer based at Rabaul under Vice Admiral Gunichi Mikawa.  Remembered as the Battle of Savo Island, Allied forces lost one Australian and three American cruisers; one cruiser and two destroyers were heavily damaged.  The Japanese naval force suffered moderate damage to one cruiser.  Admiral Mikawa, unaware of Fletcher’s pending withdrawal and concerned about the presence of US aircraft, retired to Rabaul without attempting to attack any of the Allied transports.

By 9 August, the bulk of the 1st Marine Division formed a loosely defined defensive perimeter around Lunga Point and airfield.  Vandergrift directed his logisticians move the landed supplies and equipment within the perimeter [6].  Using captured Japanese construction equipment, work began on the airfield almost immediately. On 12 August, the Marines renamed the airfield Henderson Field [7] and on 18th August, the airstrip became operational.

[1] Not every senior Japanese military officer believed it was a wise choice to attack the United States. The Japanese economy was already straining to keep of with the demands of war in China.  Vice Admiral Yamamoto, chief architect of the strike at Pearl Harbor, had very strong misgivings about war with the United States.  See also: The Truly Reluctant Admiral (in several parts).

[4] Admiral Ernest J. King was the architect of Watchtower.

[5] Within a short time, the Marines began to refer to Guadalcanal operations as “Operation Shoestring”.

[6] Food stores, when combined with captured Japanese supplies, gave the Marines 14-days of food supplies.  To conserve these stores, Marines received only two meals per day.

[7] Named in honor of Major Lofton R. Henderson, a Marine Corps aviator killed during the Battle of Midway.

11 thoughts on “Guadalcanal: First to Fight —Part I”