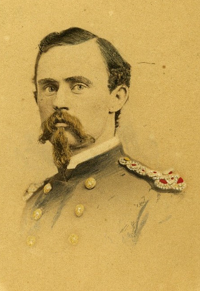 Henry Cochrane is another of the so-called Old Breed Marines: he served during the Civil War.  Described as a somewhat cantankerous fellow, he is known for his professionalism, adherence to regulations, and tempered protocol.  I write of the tempered protocol because, in his adherence to regulations and military propriety, Cochrane was often critical of senior officers and known to be a stickler for detail.  Much of this, no doubt, stems from the fact that on several occasions during the war, he was assigned as a judge advocate prosecuting cases against senior officers.

It is probably fair to say that Cochrane’s long service was nothing if not controversial, beginning even at the very outset of his 45 years of active duty.  Relying upon his father’s political connections, Cochrane applied for a commission in the U. S. Marine Corps in 1861.  Unhappily, regulations at that time prohibited the commissioning of anyone under the age of 20 years; Cochrane was only 18 years old at the time.  No sooner had his commission come through, the Commandant of the Marine Corps rescinded it.  Cochrane immediately applied to the Secretary of the Navy for an appointment—and received one to Master’s Mate[1].  While serving in the Navy, Cochrane participated in the following Civil War engagements: the DuPont Expedition, Battle of Port Royal, S.C., action with Thunderbolt Battery, Warsaw Sound, Ga., blockade of the ports and harbors at Charleston and Savannah, S.C., expeditions to Cumberland, Ga. and St. John’s River, Fla., and the capture of Fernandina and Jacksonville, Fla.

Having served nearly two years at sea, Cochrane gained important insight into the workings of the U. S. Navy and U. S. Marine Corps.  Upon reaching his 20th birthday, Cochrane again applied to the Marine Corps for a commission, which was approved —and on 23 May 1863, he found himself standing just outside the Marine Barracks, 8th and I Streets in Washington DC.

In mid-November 1863, Lieutenant Cochrane was assigned to accompany the United States Marine Corps Band to Gettysburg, Pennsylvania; soon after the presidential party boarded the train, Cochrane found himself sitting adjacent to the President of the United States.  In a work titled “With Lincoln to Gettysburg,” Cochrane described the beginning of his journey in this way:

“The last car was a kind of president’s or director’s car with about one-third of the rear partitioned off into a room with the seats around it, and in this room, I found myself seated vis-a-vis to the President” Cochrane.  The rest of the car was furnished in the usual manner.  I happened to have bought a New York Herald before leaving and, observing that Mr. Lincoln was without a paper, offered it to him.  He took it and thanked me, saying ‘I like to see what they say about us,’ meaning himself and the generals in the field.  The news that morning was not particularly exciting, being about Burnside at Knoxville, Sherman at Chattanooga, and Meade on the Rapidau, all, however, expecting trouble.  He read for a little while and then began to laugh at some wild guesses of the paper about pending movements.  He laughed very heartily and it was pleasant to see his sad face lighted up.  He was looking very badly at that particular time, being sallow, sunken-eyed, thin, care-worn and very quiet[2].  After a while he returned the paper and began to talk, remarking among other things that when he had first passed over that road on his way to Congress in 1847 …”

During the Civil War, Cochrane served both at sea and ashore; he was with Admiral Farragut at Mobile Bay.  In a letter to the Secretary of the Navy, Admiral Farragut commended Cochrane for his coolness under fire.  Even during these early days of service, however, Cochrane was a stickler for military correctness in all things: administration, operations, and proper behavior from officers.  Not everyone welcomed Cochrane’s criticism, particularly those who were senior in rank or grade —and especially not anyone serving as Cochrane’s commanding officer.  As it turns out, however, General Cochrane (advanced to Brigadier General after his retirement) was one of the more insightful officers ever to wear the uniform of a United States Marine.

After the Civil War, Cochrane was promoted to first lieutenant and continued his sea service in the uniform of a U. S. Marine.  In 1869, Cochrane was sailing aboard the USS Jamestown in the South Pacific.  His commanding officer was Commander William Truxton.  In a magazine series titled Adventures of Henry Clay Cochrane, Cochrane was supposedly disagreeable with the comportment of Truxton.  The magazine reported, “With unfailing regularity, the captain of the Jamestown turned out all hands on the first Tuesday of each month and read to them the articles of war.  For Cochrane, his commanding officer was a cross to bear from the very first day.  Cochrane believed Truxton to be a poor seaman, for as each time the ship’s bearings were taken, a great surprise was shown when it was learned where the ship really was.  Furthermore, the captain frequently appeared upon the deck in his bedroom slippers and an old frock coat, a practice that sent the fastidious Cochrane into fits of anger.”

Until the turn of the century, Marine Corps service took the form of duty either at Marine Barracks or sea duty.  The normal complement of a shipboard Marine detachment most often consisted of one officer and fifteen enlisted men.  From this number, Marines served as orderlies to the ship’s captain, performed ceremonies, crewed ship’s main guns, and made up an integral part of the landing party.  Marines also enforced order among the bluejackets, much to the consternation of naval officers, who viewed the Marines as too strict.

Life aboard ship was miserable for both Marines and sailors.  Their food was of poor quality and lacking in proper nourishment—which was particularly true between ports of call.  Fresh water was strictly rationed. Ship’s officers fared little better than the enlisted men.  Quarters for all were cramped and damp, particularly after the ship experienced heavy seas.  Cochrane preferred to sleep on deck in a hammock, where he hoped to catch what cool air there was available.

For Marines and sailors alike, duty at sea was an endless repetition of drill.  Cochrane divided the ship’s landing party into four companies; he assigned six Marines to one gun.  Drill for Marines included artillery support and drills that focused on training as skirmishers.  He exercised the men in repelling boarders.

At sea, it was a major task to keep weapons free from the effects of the salt water and in this, Cochrane’s Marines found him unforgiving when even the slightest touch of rust was found on any weapon in their charge.  In addition to rifle training, he instructed his Marines in the finer points of the Sharps and Hawken carbines.  Cochrane relied upon Upton’s Infantry Tactics —the Landing Party Manual of the day; these instructions occurred each day at sea, particularly in elements pertaining to artillery doctrine[3].

The Jamestown’s voyage lasted three years, so if we are to believe the aforementioned magazine article, Cochrane was likely to experience many fits of anger.  Cochrane even wrote at one point that he was ready to quit the Marines after the journey, but, in spite of his frustrations, he was able to hold on for another 34 years.

Cochrane’s journeys also took him to the Middle East, where there was an uprising in Egypt, to Moscow as an American representative at the coronation of Czar Alexander III, as well as service as ashore at Guantanamo Bay in the Spanish-American War at the turn of the century.  He also commanded Marines representing the U.S. at the Universal Exposition in Paris to celebrate the 100th anniversary of the French Revolution. His final overseas assignment was as commander of the Marine forces in the U.S. relief expedition to China in the Boxer Rebellion. 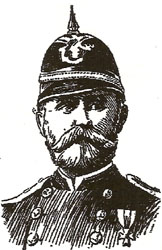 Having achieved the rank of Colonel, Cochrane was placed on the retired list on March 10, 1905, the 42nd anniversary of his Marine Corps commission.  He and his wife returned home to Chester, Pennsylvania where he remained active in public speaking and civic activities.  On April 13, 1911, the President of the United States appointed Cochrane a brigadier general.  Cochrane died April 27, 1913, when he apparently suffered a heart attack at his residence.

Nevertheless, Henry’s retirement was not the end of the Cochrane military legacy. His son, Edward Lull Cochrane, achieved Vice Admiral before retiring in 1947.  Grandsons, Edward Lull Cochrane Jr. and Richard Lull Cochrane each completed service in the U. S. Navy as captains, with Richard surviving the attack on Pearl Harbor on Dec. 7, 1941.  It is interesting to note that each of his grandsons commanded U. S. Navy combat ships named in honor of fallen Marines.

[1] At the time of his appointment in 1861, a Master’s Mate was an experienced seaman (which makes one wonder how Cochrane received his appointment); after the Civil War, the rating Master’s Mate changed simply to “Mate.”  Apparently, Cochrane’s duties were to carry out the wishes of his commanding officer.  Aboard the USS Pembina (a gunboat), Cochrane supervised two sections of deck guns during several engagements with Confederate forces.

[2] Modern historians attempt to explain Lincoln’s sickly appearance in this way: he was suffering from the Small Pox virus known as variola major; beyond this, President Lincoln was well-aware of the fact that the people of Pennsylvania were not among his staunchest supporters.  Many Pennsylvanians petitioned Harrisburg to impede black migration; they were worried about the influx of Negroes to their state.  There was a concerted effort by Democrats to declare Lincoln’s draft emancipation order as unconstitutional.  Pennsylvania Democrats saw Lincoln as a tyrant; an enemy of state’s rights.  No doubt these were matters that weighed heavily on President Lincoln’s mind.

[3] Much of the debate over just how the United States would take its proper place in the greater world revolved around a pair of extraordinary thinkers —one from the Navy and one from the Army— whose proposals would influence American strategy and tactics for decades to follow.  Rear Admiral Alfred Thayer Mahan’s theories helped lead to the creation of so-called big gun navies as tools of nationalism; Colonel Emory Upton had a tremendous influence on arms and tactics for the American infantry.  A brevet major general by age 25, Stephen Ambrose described Upton as “the epitome of a professional soldier;” a man who was as much at home in the field as Admiral Mahan was afloat.  Everywhere he went, Upton displayed immense courage and devised startling new tactics, sometimes on the battlefield itself.