It isn’t just about driving and maintaining rolling stock. It’s about providing sustainable combat service support to front line troops; without the motor transportation community, there would be no way to push forward to the battle area much-needed combat supplies: bullets, beans, and band-aids.  Without a steady flow of logistics, there can be no success on the battlefield.  Motor transport is a tough job; there’s a lot to know about moving men and equipment forward under all weather conditions and terrain features.  It’s also dangerous work, because motor transport units are primary targets of enemy air and ground forces.  If an enemy can interrupt the supply chain, really bad things start to happen.  It is for this reason that Marines assigned to motor transport units are, in fact, combat Marines.

The Marine Corps activated the 7th Motor Transport Battalion (now known as the 1st Transportation Battalion) to support the 1st Marine Division during the Korean War.  Its Korean War service began in October 1950 and lasted through December 1953.

Twelve years later, in May 1965, forward elements of the 7th Motor Transport Battalion began their service in the Vietnam War.  Company A (Reinforced) arrived in Indochina as an attachment to the 7th Regimental Landing Team (RLT-7).  By July of that year, the 7th Motor Transport Battalion consisted (on paper) of H&S Company (-), Company B, Company C, and Company D.  The battalion commander was Major Louis A. Bonin[1].

Almost immediately after arriving in Vietnam, ninety percent of the personnel assigned to the 7th Motor Transport Battalion in California received orders moving them over to the 1st Motor Transport Battalion, which was at that time assigned to Chu Lai. The reason for this shift of personnel was combat necessity —but along with this decision, 7th Motors became ineffective as a combat service support organization pending the arrival of newly graduated Marines from recruit training and basic motor transportation schools (in the United States) and pending the arrival of additional equipment. Combat operations were intense during this period —so much so, in fact, that much needed battalion-level (second echelon) maintenance simply wasn’t performed because Company A was detached from the battalion.  This resulted in a significant reduction in motor transport operational capability.  By the time these vehicles received their much-needed attention, vehicle readiness was around 50%.  As an example of why proper vehicle maintenance was (and is) important:

In May 1966, Colonel Bonin and his Marines executed 3,744 combat support missions involving 22 tactical convoys over 129,961 miles.  During this month, there were eight separate enemy attacks that involved the detonation of enemy mines, incoming mortars and small arms fire, and on the 24th of that month, a Viet Cong sympathizer tossed a poisonous snake into the bed of one of the trucks.  The Marines riding in the bed of that truck were not happy campers.  Moreover, the battalion lifted 24,061 tons of supplies on 1,623 pallets and a total of 33,923 combat personnel supporting forward units.  The battalion served in Vietnam for five years; to appreciate their service, multiply the foregoing statistics by a factor of sixty.

In effect, the Marines of 7th Motor Transport Battalion were constantly on the road, constantly exposed to enemy action, and constantly involved in such programs as Medical Civil Action (MEDCAP).  When the Marines weren’t moving personnel or equipment, or seeing to the needs of local Vietnamese, they were cleaning their weapons and getting a few hours rest. After weeks of sustained operations, hardly anyone knew what day it was.  See also: Personal Memoir by Corporal Chuck McCarroll, USMC.

In the infantry, Marines train to fight.  In the combat service support arena, Marines perform real-world support on an ongoing basis. Their daily missions in times of peace are the same as those performed in actual combat, less people shooting at them, of course.  And, given the deployment and training schedules prevalent in the Marine Corps since the end of the Vietnam War, the pace is fast and furious.  Marines who drive medium to heavy-lift vehicles must know how to complete their combat service support missions.  Supplies, materials, and men must always get through —and they do, in times of peace and in times of war.  In order to accomplish these things, the vehicles must be maintained —and they are.  It’s a tough job —made tougher when higher headquarters assigns unusual tasks.

1988 was a busy year. Long reduced to three companies (H&S Company, Truck Company, and Transport Company), the Marines of 7th Motor Transport Battalion were “turning and burning.”  Beyond their mission to support the two Marine Expeditionary Units (MEUs), additional requirements reduced manpower levels to a point where Combat Service Support Elements (CSSEs) could barely complete their missions.  Worse, personnel shortages increased the likelihood of serious mishaps.  Operating heavy equipment is dangerous work.  What additional taskings?  Under mandated fleet assistance programs, motor transport companies experienced personnel reductions by as much as 20% in order to satisfy the demands of host commands … that is, sending combat Marines to base organizations to staff “special services” billets.  It was a waste of well-trained and much-needed operators/mechanics, particularly when the host commander assigned these Marines to rock-painting details.

This was the situation at 7th Motor Transport Battalion in 1988.  As already stated, personnel shortages make dangerous work even more so. Marines would return to the battalion after one six-month MEU deployment and begin spooling up for a second.

Between May and August 1988, 250-forest fires broke out within the Yellowstone National Forest —seven of these caused 95% of the destruction. At the end of June, the National Park Service and other federal agencies had mobilized all available personnel. It wasn’t enough … the fires continued to expand.  Dry storms brought howling winds and lightening, but no rain.  On 20 August —dubbed Black Saturday— a single wildfire consumed more than 150,000.  Ash from the fire drifted as far as Billings, Montana —60 miles northeast of Yellowstone. More land went to flames on this one day than in all the years since the creation of Yellowstone National Park.  Among the worst were the Snake River Complex and Shoshone fires.

Yellowstone wasn’t the Western United States’ only fire.  In that year, officials reported more than 72,000 fires.  Firefighters and equipment were stretched to the limit. To help fight the fire, US military personnel were tasked to provide support to the front-line firefighters.  Before it was over, more than 25,000 personnel participated in efforts to quell these fires.  Crews worked for two or three weeks, send home to rest, and returned for another tour on the line.  The task involved digging trenches, watering down buildings, clearing undergrowth near structures, and installing water pumps.  The front line extended more than 655 miles.  Hundreds of men worked on engine crews and bulldozing equipment; much of their efforts involved protecting existing structures.  Men received injuries requiring medical treatment for broken bones, skin burns, and lung damage due to noxious fumes.  One firefighter and one pilot died in an incident outside the wildfire area. 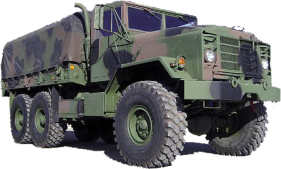 Captain Dunlap and his Marines Departed Norton Air Force Base aboard C-5 aircraft.  The combat service support element landed at the Wester Yellowstone airstrip, which at the time was serving as the Federal and State Firefighting headquarters and where, ultimately, the 7th Engineer Battalion established its command post.  Upon arrival, Dunlap assigned one transport platoon with five-ton trucks in direct support of a Marine infantry battalion further inside the park.

The Marine Corps mission was to relieve civilian firefighters by following up on the fire-line and extinguishing any smoldering areas.  Transport Company provided the lift for infantry Marines to operationally sensitive areas inside Yellowstone.  The overall commander of the U. S. Forest Service assigned daily missions to the Marines via the 7th Engineer Battalion command element, who in turn passed them on for execution to Captain Dunlap.

While serving in Yellowstone, 7th Motor Transport Battalion personnel dined on field rations (officially referred to as Meals, Ready to Eat[3]) and meals provided by US Forest Service caterers.  West Yellowstone Base Camp personnel could walk to the small town of West Yellowstone. Local restaurant owners offered free chow to firefighters and military personnel; few of Dunlap’s Marines partook of the freebies because of the financial impact on local citizens.  Dunlap’s Marines didn’t see any reason to make it more complicated for them than it already was.  Local hotel owners offered billeting to the Marines, but they preferred to live in tents.  The Forest Service provided showering facilities.

Captain Dunlap’s company returned to Camp Pendleton, California two weeks later.  The citizens of West Yellowstone loved “their” Marines and invited them to march in their town parade on the Fourth of July, an invitation that Captain Dunlap accepted.  Town elders also invited the Marines to attend the local high school prom … an invitation that the Marines did not accept.

Marines of the 7th Motor Transport Battalion excelled in this mission.  It’s what these Marines have always done since the beginning of the Korean War.  It’s a tough, thankless job.  In 1988, the Marines of 7th Motor Transport Battalion were ready, their equipment was ready, their attitudes were positive, and they excelled in the completion of their mission.  Seventh-motors Marines shined in the face of unusual adversity, and in doing so, they brought great credit upon themselves, the Marine Corps, and the United States Naval Service.  They continue to do this today as the 1st Transportation Battalion.

It was my privilege to serve alongside the Marines of 7th Motor Transport Battalion from June 1987 to June 1989.

[2] Lieutenant Colonel Curtis retired from active duty in 1991, completing more than 34 years of continuous honorable service.  He has written several essays for this blog beginning with Combined Action Platoon, Part I.

[3] Also referred to as meals rejected by Ethiopians.