Major General Vandergrift realized that he needed more Marines.  On 14 September, he moved the 3rd Battalion, 2nd Marines from Tulagi to Guadalcanal.  On 18 September, the 3rd Marine Provisional Brigade arrived with 4,157 reinforcements: the 7th Marine Regiment and one battalion of the 11th Marine Regiment (artillery).  This particular convoy [1] also delivered 137 vehicles, aviation fuel, ammunition, food rations, and engineering equipment.  With these additional assets, Vandergrift was able to establish a continual perimeter around Lunga Point.

Due to a spate of bad weather, Japanese air attacks subsided between 14 and 27 September 1942.  During this period, the Japanese replaced their flagging air fleet with 85 fighter and bombers.  While the Americans did receive additional aircraft during the same period, the Japanese maintained their superiority in numbers of aircraft (117 at Rabaul vs. 71 at Henderson Field.  The air war resumed on 27 September.

The 3rd Battalion, 4th (Aoba) Infantry Regiment landed at Kamimbo Bay on the western end of Guadalcanal on 11 September, but too late to take part in Kawaguchi’s assault.  It did, however, join Colonel Akinosuke Oka’s forces at the Matanikau River.  Tokyo Express missions on 14, 20, 21, and 24 September resupplied the Japanese land forces with food and ammunition.  An additional 280 men from the 1st Battalion Aoba Regiment arrived during this period. The Japanese transferred the 2nd and 38th Infantry Divisions from the Dutch East Indies to Rabaul beginning on 13 September; they intended that most of these men would participate in the next attack on the American Marines, an event scheduled for 20 October.

General Vandergrift was well-aware that Kawaguchi had retreated to the area west of the Matanikau River, and that numerous groups of Japanese stragglers were scattered throughout the area between Lunga Point and the Matanikau.  He accordingly scheduled a series of small-unit operations in and around the Matanikau Valley.  The purpose of these missions was to locate and destroy any stragglers, preventing them from rejoining Kawaguchi’s main body.  The first operation took place between 23 and 27 September by elements of three Marine battalions.  The Japanese of Oka’s group repulsed each of these probes.  At one point, three Marine rifle companies found themselves surrounded by Japanese infantry near Point Cruz.  After suffering heavy losses, the Marines escaped entrapment with the assistance of U. S. Coast Guardsmen [2] who displayed exceptional courage and commitment to rescuing the Marines.

In a second action between 6 and 9 October, a large force of Marines successfully crossed the Matanikau River, attacked newly landed Japanese forces from the IJA 2nd Infantry Division, and inflicted heavy losses on its 4th Infantry Regiment.  The Japanese, badly mauled, withdrew from the Matanikau. Between 9 and 11 October 1st Battalion, 2nd Marines raided two small Japanese outposts some 30-miles east of Lunga Point near Aola Bay.  The raids resulted in 35 Japanese killed in action, but it cost the Marines 20 dead (including three Navy corpsmen).  The Marine’s aggressiveness caused the Japanese to reconsider their planned assault on 20 October.

Throughout the last week of September and first week of October, the Tokyo Express delivered additional troops from the 2nd Infantry Division to Guadalcanal.  The Imperial Japanese Navy promised to support the Army’s planned offensive by delivering reinforcements and needed equipment, and by increasing its air attacks on Henderson Field.  Warships would bombard the American airfield.

Meanwhile, Lieutenant General Millard F. Harmon, commanding U. S. Army Forces in the South Pacific, convinced Admiral Ghormley that the U. S. Marines on Guadalcanal needed immediate reinforcements if the Allied forces were to successfully defend the island from an anticipated Japanese offensive.  On 13 October, the US 164th Infantry Regiment and its contingent of 2,837 men arrived to reinforce the Marines on Guadalcanal.

The Japanese continued preparations for a large-scale offensive in late October.  Deeming the Tokyo Express operation insufficient to this purpose, Japanese planners decided to risk a one-time departure from the Tokyo Express.  On 13 October, a convoy of six cargo ships with eight protective destroyers departed the Shortland Islands for Guadalcanal. The convoy carried 4,500 troops from the 16th and 230th Infantry Regiments, some naval infantry, two battalions of heavy artillery, and one company of tanks. 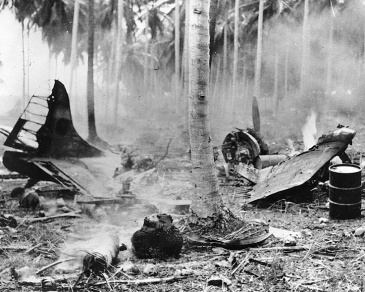 To help safeguard these assets from Marine aviators, Admiral Yamamoto sent two battleships from Truk to bombard Henderson Field.  The bombardment commenced at 0133 on 14 October. Together, the two battleships delivered 973 14-inch shells into the Lunga perimeter for nearly an hour and a half.  IJN naval artillery heavily damaged both runways, destroyed nearly all available aviation gas, destroyed 48 of 90 CAF planes, and killed 41 men (including six pilots).  Despite this damage, Marine combat engineers and Seabees were able to restore the field to operational condition within a few hours.  Thirty-seven replacement aircraft were flown in to Cactus from Espiritu Santo and Army/Marine Cargo planes began ferrying in aviation fuel.

Japan’s convoy reached Tassafaronga, Guadalcanal after midnight on 14 October.  Unloading operations commenced immediately.  Throughout the next day, CAF operations bombed and strafed the ships while they were unloading, destroying three cargo ships. Having unloaded all the troops and about two-thirds of the supplies and equipment, what remained of the Japanese convoy departed on 16 October.  Japanese heavy cruisers continued to bombard Henderson Field.

With this new influx of troops, General Hyakutake now had 20,000 men at his disposal to execute his assault on the American positions.  Hyakutake’s first mistake, however, was that he under-estimated the strength of the Allied land forces.  He expected a Marine defense of about 10,000 men; in reality, there were 23,000 soldiers and Marines at Lunga Point.  More than this, Hyakutake underestimated the effect of jungle warfare on his men.  In order to reach the Marine positions, the Japanese had to construct a road from the Matanikau River to the Lunga perimeter.  The fifteen-mile-long road crossed numerous streams and rivers, deep, muddy ravines, steep ridges, and think jungle foliage.  Construction of the road didn’t begin until 12 October 1942.  General Hyakutake’s 2nd Infantry Division began its movement-to-contact on 16 October.  They were still struggling through this morass on 23 October and had not yet reached their attack positions.  Hyakutake postponed the assault until 1900 on 24 October.  The Marines, meanwhile, were blissfully unaware of the Japanese approach.

Due to the American Marine’s interest in the Matanikau region in early October, the Japanese relinquished these positions.  General Hyakutake decided that his main thrust would be from south of Henderson Field. His 2nd Infantry Division (augmented by troops from the 38th Infantry Division), serving under Lieutenant General Masao Maruyama (about 7,000 soldiers, organized in three regiments of three battalions each) was ordered to march through the dense jungle and attack the American positions from the south near the east bank of the Lunga River. Hyakutake ordered the assault to commence on 22 October.  He then changed the date to 23 October.  As a means of distracting the Americans, Hyakutake ordered Major General Tadashi Sumiyoshi, commanding 3,000 Japanese soldiers and a battalion of heavy artillery, to attack Marine defenses from the west along the coastal corridor.  Hyakutake reschedule the attack for 24 October, but General Sumiyoshi was unable to communicate this change to his forward units.

At dusk on 23 October, two battalions of the 4th Infantry Regiment (supported by tanks) launched an attack on Marine positions at the mouth of the Matanikau River.  Marine Corps artillery and naval gunfire repulsed Sumiyoshi’s attack, destroying all of Sumiyoshi’s tanks.  The Marines suffered only light casualties.

“I fear all we have done is to awaken a sleeping giant and fill him with a terrible resolve.”

A few small groups of Japanese did infiltrate the American lines, but the Marines hunted them down and, without mercy, killed them.  Fifteen-hundred of Maruyama’s troops died; the Americans lost sixty killed in action. In the air, the Cactus Air Force downed fourteen Japanese aircraft and sent a light cruiser to the bottom of the sound.  Despite this beating, the Japanese continued their assault.  On 26 October, Marines operating near the Matanikau slaughtered their attackers.  General Hyakutake called off the offensive and withdrew his remaining force.  Half of Maruyama’s survivors marched back to the upper Matanikau Valley, while the 230th Infantry Regiment under Colonel Toshinari Shoji returned to Koli Point.  Leading elements of the 2nd Infantry Division arrived at 17th Army headquarters on 4 November.  Between the mauling of the American Marines, malnutrition, and tropical diseases, the 2nd Division was utterly destroyed.  The best it could do is help form a defensive perimeter along the coastal region of Guadalcanal.  In total, the Japanese lost between 2,500-3,000 troops; the Marines lost 80 killed.

At about the same time General Hyakutake’s troops were attacking the Lunga perimeter, Japanese aircraft carriers and other large warships moved into a position near the southern Solomon Islands.  From this location, Admiral Yamamoto hoped to engage and destroy allied naval forces —particularly those that responded to Hyakutake’s ground offensive.  At this time, allied naval forces (composed mostly of the U. S. Navy) were under the overall command of Admiral William Halsey [3] —a man who desperately wanted to meet the Japanese at sea.

Japanese and American carrier forces confronted each other on the morning of 26 October in what we remember in history as the Battle of the Santa Cruz Islands.  Following the usual exchange of aerial attacks, Allied surface ships withdrew from the battle area with the loss of one carrier sunk (USS Hornet), and another heavily damaged (USS Enterprise).  The Japanese suffered extensive damage to two carriers and a significant loss of aircraft.  This was a trend the Japanese could not sustain.  The loss of qualified carrier aircrews was a “war stopper.” Japanese carriers no longer played a key role in this campaign.

General Vandergrift, seeking to exploit his victory over the 17th IJA launched offensive operations west of the Matanikau River.  Serving under Colonel Merritt Edson, six Marine battalions and one Army battalion assaulted Kokumbona.  Their mission was to kill or capture what remained of the 17th Imperial Japanese Army. Defending Point Cruz was the 4th Infantry Regiment under Colonel Nomasu Nakaguma.  Nakaguma’s regiment was significantly understrength due to battle damage, tropical disease, and malnutrition.

Early in the morning of 3 November at Koli Point, five Japanese destroyers delivered 300 IJA troops to support Colonel Shoji.  Vandergrift directed 2/7 under LtCol Herman H. Hanneken to aggress the Japanese, but the Japanese pushed his battalion back almost to the Lunga perimeter. Vandergrift quickly sent Puller’s 1/7 and two battalions of the 164th to reinforce him.  As the Americans attempted to encircle Shoji, General Hyakutake ordered Shoji to withdraw and reinforce the main body at Kokumbona.  A gap developed in the swampy creek on the southern flank of the American lines.  Between 9-11 November, Shoji and about 3,000 of his men escaped into the jungle. The next day, Hanneken’s force overran and killed the remaining Japanese soldiers caught in the pocket.  Japanese losses at Koli Point numbered 475 killed. Allied losses were 40 KIA and 120 WIA.

Meanwhile, on 4 November, two Raider companies (reinforced with one company from the 147th Infantry Regiment) under LtCol Evans Carlson landed by boat at Aola Bay, 40 miles east of Lunga Point.  Carlson’s mission was to provide security for a battalion of Seabees as they attempted to construct an airstrip at that location.  Admiral Halsey, acting upon the recommendation of Admiral Turner, approved the construction plan.  Halsey later abandoned the project because the terrain at Aola Bay was unsuitable for aircraft operations.  On 5 November, General Vandergrift ordered Carlson and his raiders to search and destroy any of Shoji’s remnant force.  Carlson set off on a 29-day patrol from Aola Bay to Lunga Point. Carlson reported several clashes with Japanese, reportedly killing 500 and Marine losses totaling 16 killed in action. Tropical disease and malnutrition continued to affect Japanese combat efficiency.  By the time Colonel Shoji reached the Lunga river in mid-November, roughly half the distance to Matanikau, only 1,300 men remained alive. Half of those died before he reached the 17th IJA headquarters.

[1] The Japanese submarine I-19 torpedoed USS Wasp, sinking her southeast of Guadalcanal, leaving the US Navy with one carrier in the South Pacific: USS Hornet.

[3] Concluding that Admiral Ghormley lacked the ability to win against the Japanese, Admiral Nimitz replaced him with Halsey on 18 October 1942.