I feel privileged to have been part of our country’s naval establishment.  In my years as a Marine, I have known and worked with superb Navy officers.  So, I enjoy relating stories about the best of the lot, as opposed to officers (of any service) who allowed politics to interfere with their obligations as officers: we have had too many instances of this in our history going all the way back to the Revolutionary War—some of these more recent.

In my opinion, one of the great Naval officers in our history was Bowman Hendry McCalla (1844-1910), a man who was not only proficient in the application of naval power, but also one who demonstrated personal courage in the face of the enemy, and an officer who knew how to best utilize his Marines.  He wasn’t a perfect man; he made mistakes, as we all have from time to time, but he was a good man who did his best to serve the United States of America.

McCalla was appointed to the United States Naval Academy in November 1861.  At that time, the USNA was temporarily located at Newport, Rhode Island (note 1).  In November 1864, young McCalla graduated fourth in his class.  After graduation, he was assigned to the South Atlantic Blocking Squadron.

Following the Civil War, McCalla served successively with the South Pacific Squadron, the Home Squadron, and the European Squadron through 1874.  Within this ten year period, McCalla was promoted to Lieutenant Commander.  Upon completion of his tour with the European Squadron, he was assigned to serve as an instructor at the US Naval Academy.  He afterward served as the Executive Officer (second in command) of the steamer USS Powhatan, and from 1881 to 1887, as assistant bureau chief of the Navy’s Bureau of Navigation.  He first came to public notice in April 1885 when he led an expeditionary force of Marines and Sailors in Panama to protect American interests during an uprising against Colombian control.

From 1888 to 1890, then Commander McCalla served as Commanding Officer, USS Enterprise, which was then part of the European Squadron.  Known as a strict disciplinarian, McCalla crossed the line in his dealings with subordinates and, as a result, faced a highly publicized court-martial upon his return to the United States.  Among other charges, he was accused of striking an enlisted man.  Convicted of all charges, McCalla was suspended from duty for three years, which caused him to lose several numbers on the navy’s seniority (lineal precedence) list.  He was restored to duty in 1893 and served three years as the equipment officer at the Mare Island Navy Yard in San Francisco, California —it was not a great assignment, but McCalla had to demonstrate that he had learned his lesson.

In 1897, Commander McCalla assumed command of the Montgomery-class cruiser USS Marblehead (note 2).  With the beginning of the Spanish American War, McCalla was placed in command of Navy Forces blockading Havana and Cienfuegos, Cuba.  He shelled the port city of Cienfuegos on 29 April 1898.  Then, on 11 May, members of the ship’s crew, along with sailors from the USS Nashville, cut two of the three telegraph cables located at Cienfuegos.  McCalla later made arrangements with local Cuban insurgents regarding ship-to-shore communications, but he erred in failing to so inform his superiors.  This oversight caused a significant delay in Commodore Winfield Scott Schley’s ability to blockade the enemy’s naval forces, then under the command of Rear Admiral Pascual Cervera y Topete at Santiago de Cuba.

USS Marblehead participated in the blockade before being detached to reconnoiter and seize Guantanamo Bay in southeastern Cuba.  McCalla bombarded Spanish positions there on 7 June, capturing the outer harbor for use as a supply base for the American blockading squadron.  He then provided material support to the amphibious assault by the 1st Marine Battalion on 10 June.  With the Marblehead, McCalla remained on station while the Marines solidified their positions, and, having done so, taking an instrumental part in the effective bombardment of a Spanish fort at Cayo del Toro in Guantanamo Bay.  In appreciation of his actions, the Marines honored the commander by naming their encampment after him —Camp McCalla.

Owing to his courage in the face of the enemy, McCalla was advanced six numbers in grade, restoring him to the seniority he had held before his court-martial.

McCalla was promoted to Captain in 1899 and ordered to assume temporary command of the Norfolk Navy Yard; he assumed command of the USS Newark in September for service on the Asiatic Station.  Arriving on station, McCalla participated in the naval campaign against Filipino insurgents during the Philippine-American War (1899-1902).  It was during this time that Newark was directed to provide reinforcements and needed supplies to the American Legation in Peking.

Captain McCalla afterward led 112-sailors and Marines, reinforcing the Seymour Expedition; as senior US Naval officer, Vice Admiral Seymour appointed McCalla to serve his deputy commander.  Confronted by overwhelming Chinese forces, the Seymour Expedition was unsuccessful in reaching Peking, but during a series of engagements, Captain McCalla was cited for displaying calm and steady courage under fire despite being wounded.  Captain McCalla was later commended for bravery by the Congress of the United States, Kaiser Wilhelm II of Germany, and King Edward VII of Great Britain. 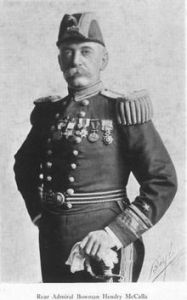 McCalla completed his sea service as Commanding Officer of the battleship USS Kearsarge and, as an additional duty, serving as Chief of Staff to the Commander, North Atlantic Squadron.  He was then assigned to command the Mare Island Navy Yard.  Promoted to Rear Admiral on 11 October 1903, McCalla oversaw the Navy’s immediate response to the San Francisco earthquake in April 1906 —which involved ordering ships, sailors, and Marines to aid the stricken city.

Rear Admiral McCalla retired from active naval service in June 1906.  He remained in the San Francisco area after retirement; in 1908, he helped welcome the ships of the Great White Fleet to San Francisco Harbor.

Admiral McCalla passed away in Santa Barbara, California on 6 May 1910.

1Following the Baltimore Riot on April 19, 1861, pro-Confederate Marylanders took action to stop the movement of Union volunteers through the city on their way to Washington.  Telegraph wires were cut, and railroad bridges were destroyed.  USNA Superintendent George S. Blake, who was concerned about the possibility of a Confederate attempt to occupy the Naval Academy, decided to relocate the school to Newport, Rhode Island on 25 April 1861.

7 thoughts on “A Great Naval Officer”