In 1839, 140 British soldiers bravely resisted the martial will of more than 5,000 Zulu warriors. 150-years later, twenty British Marines resisted an Argentine invasion and, in the process, gave the invading army a bloody nose.  It seems to me, looking back in time, that the Argentine military might have learned a valuable lesson from history … but, no.

The Falkland Islands (and its territorial dependencies the South Georgia and Sandwich Islands) had been a British territory for 141-years; this was challenged by Argentina in 1982 when that country reasserted its claims that the islands are Argentine territory. In the minds of the Argentines, their invasion was no more than a reclamation of its own territory.  From the British perspective, the Falklands had been a Crown colony since 1841 and the islanders who lived there were descended from the original British settlers.

There are excellent books about the Falklands War, but not many chronicle the events on the Falklands in the early days of the Argentine invasion.   Section leader George Thomsen, Royal Marines related his story of these events to author Malcolm Angel.  The book is titled Too Few, Too Far (Amberly, 2008) [1], which tells us the ordeal for 22 Royal Marines began when Argentine scrap dealers landed illegally at South Georgia and then had the audacity to raise the Argentine flag.  Thus it was that in mid-March 1982, Lieutenant Keith Mills, Royal Marines was ordered to take a detachment of Marines to sort the whole thing out.  George Thomsen was only days from returning home on normal rotation when his section of eight Marines was detailed to Mills’ detachment. Of course, neither Lieutenant Mills nor any of his Marines had any way of knowing that the sorting would lead to a full-blown war with Argentina. 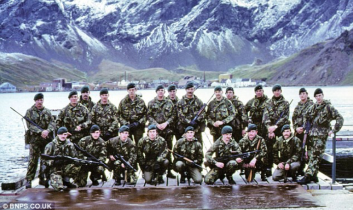 Only moments after this photograph was taken on 3 April 1982, the first Argentine helicopter arrived. The Marines scurried for cover and then opened fire with rifles and automatic weapons, shooting down the Puma gunship as it attempted to land enemy troops.  “It was like a gift,” said George Thomsen.  “That’s what kicked off the battle and we were 16-nil from the start.”

With the peace now shattered, the Marines put another Argentine helicopter out of action.  Still, they realized that they could not hold back the tide of invading Argentine soldiers.  Thomsen said, “It was like Rorke’s Drift, only this time the enemy was well-armed.  The enemy began landing troops from several ships and we were out-numbered 50 or 100 to one.”

Recognizing that there was no hope of reinforcements, the Marines set about doing everything possible to prepare for a bloody confrontation.  They booby-trapped the shoreline and fashioned explosives packed with nuts, bolts, and harpoon heads and set them beneath the jetty.

In the heroic defense that followed, the Marines fought audaciously for hours to inflict heavy casualties; when the corvette ARA Guerrico steamed into the bay.  Thomsen recounted, “It was raking us with its 40mm anti-aircraft gun until we wiped out the gun crew.  We then used a bazooka, but three out of five rockets didn’t go off. If they had, we’d have sunk it. We whacked out its Exocet launchers, disabled the 4-inch gun on the bow, and we were putting sniper fire through the bridge so that they didn’t know where they were going.  But we did put it out of action; it was listing at 30 degrees.

Nevertheless, as with their comrades defending the Falklands 800 miles away, the Marines at South Georgia were eventually forced to surrender —but not before offering the Argentinians a lesson they wouldn’t soon forget.  In the final moments, Lieutenant Mills walked brazenly up to the lead elements of the Argentine force and warned them that his men would keep fighting unless the Argentines agreed to his terms, which included safe passage for his Marines off the island.  They agreed to these terms, but then were astonished to learn that the Marines they had been fighting only numbered twenty-two.

The Marines were returned to Great Britain where they joined the task force that liberated the Falklands. South Georgia was recaptured by task force Marines and SAS on 25 April 1982.