I cannot say that Thanksgiving is a uniquely American experience; I have read stories of Spanish conquistadors offering thanks in the Americas as early as the mid-1500s, but maybe “ownership” isn’t really the issue at all.  Our first official recognition of Thanksgiving was issued by proclamation by the Second Continental Congress in 1777 at a time when the future of the American colonies was still very much in doubt.  Philadelphia, then our national capital, was then occupied by British forces.  In spite of this, Americans offered prayers of thanks to God for all His blessings —they prayed also for success in battle.  The war didn’t progress very well for the Americans over the first few years; offering thanks disappeared until reintroduced by James Madison during our second war in 1814.  Then we prayed for the protection of our new union —and for the wisdom to maintain it.

Thanksgiving became official and permanent during the presidency of Abraham Lincoln, who in 1863 issued his own proclamation.  It was written in the context of our great civil upheaval; we prayed for reunification of a badly torn nation.

Nationally, thanksgiving celebrations have changed over generations, but it may also be fair to say that thanksgiving changes over the course of our lives.  The Thanksgiving holiday we experienced as children, sitting around tables laden with more food than we could possibly eat, is not the same as when we were sitting at similar tables as mid-life adults.

This is especially true among those who experienced thanksgiving away from home while engaged in combat.  After such experiences as these, pick any war, the holiday is never again quite the same.  Among our Marines and soldiers, the sweltering jungles of the South and Central Pacific while facing the fanatical Japanese stood in stark contrast with the bitter cold of the Korean peninsula.  In the latter case, some of our troops were provided with a hot, freshly roasted turkey with all the trimmings, but that was just moments before the 13 Chinese infantry divisions launched a massive assault against forward elements of the US 4th Infantry Division and 1st Marine Division at the Chosin Reservoir and along the entire front of the Eighth US Army in the west.  It involved some of the fiercest fighting of the entire Korean War —it was a Thanksgiving Day that thousands of men would not survive; that thousands more would never forget.

Only a few years later, our troops returned to jungle warfare —this time in Vietnam, where once more the Thanksgiving holiday became just another day “in the suck.”  In these circumstances, the memories of earlier festivities, of happier times, are best locked away, along with feelings of loneliness.  The North Vietnamese guards never hesitated to use isolation to enhance despair among our troops who had become prisoners of war. 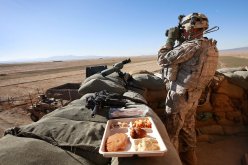 The engagement in hostile conflict has become more or less constant for the United States, although I suspect that this is more reflects the incompetence of our politicians than it is upon who we are as a people  —yet, we continue to send our troops in harm’s way, and every Thanksgiving Day for far too many years, our young men and women become separated from their families and spend the day in lonely isolation from those who mean the most to them.  At home, families pray for the safe return of their children, husbands, wives, brothers and sisters.

9 thoughts on “A Time for Thanksgiving —and reflection”