The story of the Tiger continues …

While the Nicaraguan rebels remained elusive, Guardia Nacional was still in its development stage.  Only two of the Guardia were killed between October 1928 through the end of September 1929, but in that same period, 47 died from causes other than combat, and 480 deserted.  Under such circumstances as these, it was nigh impossible to withdraw American Marines from Nicaragua. 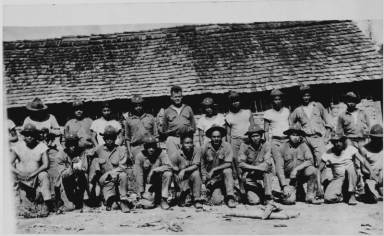 When Lieutenant Puller wasn’t leading combat patrols, he fulfilled the duties of battalion quartermaster.  This was not his favorite assignment, but he did learn to appreciate the importance of logistical support to forward units —a lesson he carried with him into future conflicts.  (Shown right, Puller with Company M, Guardia Nacional).

In January 1930, Puller led three patrols … one of these sent in response to a report of Padron’s location.  It turned out to be a false rumor, however, and all Puller ended up with was a bull loaded down with bags of salt, covered over with a Marine Corps-issue poncho.  Marines found it frustrating to go into the field for days at a time and come up empty-handed; during all of 1929, the Guardia had only engaged 26 battles —and most of these were minor incidents.

In February 1930, Puller’s commander ordered him to conduct a sweep of the territory north of Jinotega, with specific instructions to check for bandit camps on Mount Kilande.  On 16th February Puller’s patrol moved out from the village of San Antonio at 0800; he organized his force into three sections (point, main body, and rear guard) with an officer commanding each of these.  Puller stationed himself on point with eight other men.

Thirty well-concealed bandits waited for the Guardia patrol some three miles outside the village; the initial fire came from a Lewis gun[1], and as it opened up, patrol members hit the deck and returned fire with Browning Automatic Rifles (BARs).  The Lewis gun soon went silent, but rifle bullets continued to pepper the column; pissed, Puller suddenly stood up in the hail of bullets and ordered a charge toward the bandit’s positions.  Surprised by such aggressive behavior, the bandits executed a speedy withdrawal.  Puller’s patrol pursued the bandits, but he was unable to regain contact.  The entire episode lasted barely twelve minutes … which is a bit longer than average for most fire fights.

The next day, Puller determined that the route to Mt. Kilande would take him through heavy foliage without the benefit of a foot path.  He would need time to cut one, so after making a foray across the Coco River, and being aware that several of his men had worn out their shoes, Puller determined to head back to his base.  On the return march, the patrol discovered the disinterred remains of a member of the Guardia killed earlier; bandits had mutilated the corpse and hung it from a tree.  Thereafter, Guardia members had no great respect for Nicaraguan bandits.

Returning to camp, Puller reflected on the firefight and concluded that his Nicaraguan Guardia contingent were seriously lacking in marksmanship skills —a deficiency he was committed to correct.

Morale was not high among the Nicaraguan Guardia; over the next several months, Marines experienced increased violence directed toward them by their Nicaraguan subordinates; several Marines were assassinated.

After the arrival of the new Battalion Commander (Colonel C. A. Wynn) and Executive Officer (Major James W. Webb) in May 1930, Lieutenant Puller received his first combat command.  He was to take over the Guardia’s newly created and only dedicated field force, designated Company M (for Mobile).  Colonel Wynn did not realize it at the time, but by assigning Puller to command this company, he had helped to create a Marine Corps combat legend.  Initially, however, the company’s complement consisted of only two officers and 36 men; it would take some time to get the company up to strength. 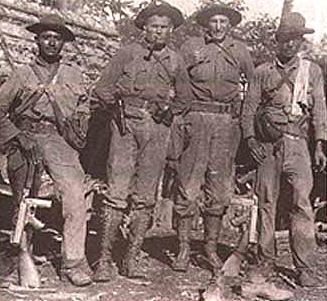 Puller’s assistant (Company XO) was an athletic Marine by the name of Gunnery Sergeant William A. Lee (serving temporarily as a Guardia second lieutenant).  (Shown right, Lieutenant Puller (with pipe) is standing center left, Lee is standing center right).  Having enlisted in the Marine Corps in 1918, Lee (like Puller) missed participating in the Great War.  In 1930, Lee was 30-years old.  Before joining the Corps, he had learned field craft from Cherokee Indians in North Carolina.  His skill-set included the ability to track man or beast through dense jungle, and maintain a fast route of march with a heavy load on his back.  In a short time, Nicaraguan bandits would learn to fear Lee as much as they feared El Tigre.

Puller wasted no time initiating aggressive patrols; his initial patrol encompassed a five-day sweep in an easterly-northeast direction.  Each night the Marines/Guardia set up camp inside a local village.  On the evening of 4 June, Puller and his men were preparing rations for their elongated patrol into the uninhabited area of Mount Kilande when they heard several shots from north of the village.  Puller sent 13 men to investigate and within short order, a firefight ensued, which lasted less than a full minute; one bandit was killed.  Puller and Lee became curious about the dead man’ weapons: he was armed a relatively new Springfield rifle, a Colt revolver, and he had plenty of ammunition for both.

(To be continued next week)

[1] The Lewis Gun was a World War I-era light machine gun of US design, perfected and mass produced in the United Kingdom.  Its inventor was Colonel Isaac Newton Lewis, US Army in 1911.  When the US military failed to adopt his machine gun, Lewis resigned his commission and moved to Belgium, where he established the Armes Automatique Lewis Company.