A quick reminder that US Marines do not formulate foreign policy, they implement it.  It is also true that if left alone to do their jobs by Washington politicians, Marines will always achieve their objectives and complete their mission.  It’s simply part of our DNA.

It is also appropriate to mention that contrary to the revisionists of our history, particularly among the liberal codswallop, the United States has always been hesitant to involve itself in the internal affairs of Latin American nations.  With respect to the leaders of these nations, I am persuaded that presidents from William McKinley to Franklin Roosevelt did realize that while you can lead a horse to water, you can’t make him drink.  No matter how many interventions were ordered by the US State Department, mostly as the result of an earnest desire to maintain an environment suitable for doing business, the caudillos were so deep-rooted in petty jealousies, lust for power, greed, opportunism, and corruption —and having utter disregard for the plight of their own people, that they were simply incapable of honest government.  A comprehensive list of Central American politicians would provide excellent candidates for induction into the Who’s Who of the World’s Psychotics.

So, when Nicaraguan president Adolfo Diaz appealed for US intervention on 15 November 1926, the day after the US officially recognized the Diaz government, President Calvin Coolidge (shown right) maintained an icy silence.  We should also consider what else was going on in the region at the time:

President Coolidge’s icy silence began to thaw after a series of outrages were committed upon Americans living and working in Nicaragua.  The affronts included the fact that Sacasa rebels seized American supplies and equipment and threatened business owners with violence if they refused to pay taxes imposed upon them by Sacasa.  In late December, an American citizen working near Bragman’s Bluff was shot to death by a rebel band —the reasons for the man’s death remain unclear.  Perhaps he refused to pay rebel taxes.  At about this same time, British and Italian ministers in Managua dutifully informed the US minister that their people too were in great danger[2].

In response to the concerns expressed by the British and Italians, Marines and bluejackets were landed from USS Galveston to stand guard over foreigners living in Managua on 6 January 1927.

It was Sacasa’s total disregard for American lives and property that finally turned Coolidge against the Liberal cause in Nicaragua.  On 10 January 1927, Coolidge informed Congress that he intended to do everything in his power to protect American interest in Nicaragua.  His decision was based upon the time-honored rights of nations to protect its nationals living in a foreign country.  Accordingly, to serve as a shield against lawless bands, Marines were landed at Rio Grande, Bragman’s Bluff, and Prinzapolca.  Moreover, Coolidge authorized the sale of 3,000 Krag Rifles[3], 200 Browning Machineguns, and three-million rounds of ammunition to the Conservative Party.

The Second Battalion, Fifth Marines (2/5) landed at Bluefields on 10 January and, after establishing a neutral zone along the Escondido River, the battalion (less its 51st Company[4]) sailed from Bluefields, through the Panama Canal, to Corinto.  At the request of President Diaz, Marines under the command of Lieutenant Colonel James J. Meade assumed the defense of Managua on 1 February 1927.  But even as American Marines provided some stability, the Diaz presidency was losing ground.  In early February, rebels captured Chinandega in a bloody house to house fight and while it is true that government troops retained control of the town, rebels burned half of it to the ground.  Americans rushed food and medical supplies into Chinandega and then followed up with a rifle company, which was posted there in garrison.  Another rifle company was sent to Leon, augmented by bluejackets.  As the sailors maintained order inside the town, Marines manned outposts on the edge of town and around railway centers.

Marines continued to pour into Nicaragua throughout February, including Marine Corps aviation assets.  One-thousand Marines of the 5th Regiment departed Quantico, Virginia under the command of Brigadier General Logan Feland[5], arriving at Corinto on 7 March.  Then present in Nicaragua were 2,000 Marines.  President Coolidge felt that the time had come to offer yet another opportunity for peaceful accord.  He dispatched Henry L. Stimson[6] to Nicaragua; his task was to broker an agreement between the warring factions.  Considering rebel attacks perpetrated against American consular officials, this would be a difficult task.  Stimson felt that the problem rested in elections; only fair elections could end this stream of rebellions.  Neither side objected to American supervision of national elections in 1928, although Sacasa wanted Diaz immediately replaced by a disinterested person.  Since there were no “disinterested” persons in Nicaragua, Diaz retained the presidency.

The agreement included the following provisions:

When Stimson departed Nicaragua in late May, he realized that not everyone was satisfied with the agreement as there were ultra-conservative and ultra-liberal groups, both of whom wanted to see everyone dead except for themselves.  Even as Diaz and General Moncada issued their joint appeal for disarmament, Moncada assumed that this would not be possible. 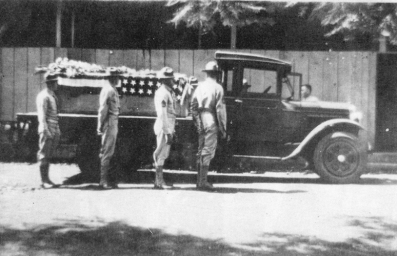 On 16 May 1927, a fragment of the rebel army raided the village of La Paz.  A detachment of Marines soon confronted these bandits and a firefight ensued.  Captain Richard B. Buchanan led his Marines down the main street to confront the rebels when he and Private Marvin A. Jackson were shot dead[8].  These “rebels” would keep Nicaragua in turmoil for years to come; they were much like Hispanic gangster groups of today.  On 20 May, the 11th Marine Regiment[9] arrived, accompanied by another aviation squadron.

The first Nicaraguan recruit constable took his oath of enlistment from Colonel Robert Y. Rhea, newly designated Chief Instructor of Guardia Nacional de Nicaragua, on 24 May … but there was no pushing and shoving to enlisted in this new organization.  Two factors explain why hardly anyone wanted to be in the Constabulary: first, coffee picking season paid more money than policing ($47.00 monthly, as compared to $0 monthly (Nicaragua’s government has a long history of unpaid soldiers[10])), and second, the Guardia’s ban on political activity.  The first company of Guardia Nacional took to the field on 1 July 1927 and by the end of the month, it was already experiencing combat—at a place called Ocotal.

[1] The consequence of Mexico’s behavior was that President Coolidge believed he had to act.

[2] US policy forbade European powers from interfering in the affairs of Latin America; the only diplomatic recourse open to Great Britain and Italy at the time was to file a protest with the American Minister (Ambassador).

[3] The Krag-Jorgenson Rifle was adopted as the standard US Army rifle in 1892, chambered in .30-40 ammunition and manufactured under license at the Springfield Armory.  The weapon is also referred to as the Springfield Rifle 1892-99.  Because the side-loading mechanism was cumbersome in combat, it was eventually replaced by a clip-feeding mechanism like that of the Mauser.

[5] Feland commanded American troops during the Battle of Belleau Wood in World War I.

[6] Stimson served twice as Secretary of War, Governor-General of the Philippines, Secretary of State, and author of the so-called Stimson doctrine which announced opposition to Japanese expansion in the Far East.

[7] The Guardia would be Nicaragua’s only military and police force, consisting of 93 officers, 1,136 men.  Most Guardia officers would come from the ranks of US Marine Corps officers and noncommissioned officers.  Only the Guardia would have control of arms, ammunition, military supplies, forts, and prison facilities … subject only to the direction of the president.

[8] Both Marines were posthumously awarded the Navy Cross.

[9] The 11th Marine Regiment, activated during World War I, was originally planned as a light artillery regiment but served as an infantry organization in France as part of the 5th Marine Expeditionary Brigade.  Never assigned to combat duty, the regiment was disbanded on 11 August 1919.  The regiment was re-activated on 9 May 1927 for service in the Caribbean as an infantry regiment.

[10] Traditionally, the government would pay its officers, and they in turn would be responsible for paying the private soldiers.  Somehow, this money always ended up in the pockets of the Nicaraguan officers.