Called Archie by his close friends, Vandegrift was born on March 13, 1887 in Charlottesville, Virginia. His father, of Dutch descent, was an architect and a building contractor, but from an early age young Vandegrift expressed an interest in the military, both from reading military history and from stories of his own ancestors who fought in various conflicts. He studied at the University of Virginia for three years and the participated in a week-long competition in 1908 in his quest to obtain a commission in the United States Marines Corps. He received his commission to Second Lieutenant on January 22, 1909. Later than year, while assigned to the Marine Corps Schools at Quantico, Virginia, Vandegrift penned an essay entitled, “Aviation: Calvary of the Future.” Nearly thirty years later, while serving as Commandant, Vandegrift would spearhead the use of rotor aircraft for air (vertical) assault.

General Vandegrift’s service at Quantico was a shaky start for his career, however. Numerous disciplinary infractions resulted in poor fitness report evaluations, including one comment by the Commandant of Marine Corps Schools, “This officer has not shown that he appreciates the responsibilities of his position as an officer and unless there is decisive improvement, his relations will not be to the advantage of the service.” In the modern day, these remarks would most assuredly result in a lieutenant’s separation after his obligatory period. Vandegrift did turn himself around, however, and in the following year he was rated “excellent.”

After completing his studies at the Marine Corps Schools, Vandegrift attended further training at Port Royal Island, South Carolina (today, the home of the Marine Corps Recruit Depot, Parris Island, South Carolina). In 1910, Vandegrift was ordered to the Marine Corps Barracks, Navy Yard, Portsmouth, New Hampshire. Between 1912 and 1914, Vandegrift was detached from the Barracks to duties at sea and on foreign shore. He first went to Cuba, and then to Nicaragua where he participated in the bombardment, assault, and capture of Coyotepe. He subsequently participated in the engagement and occupation of Vera Cruz, Mexico.

Following his promotion to First Lieutenant in 1914, Vandegrift attended the Advance Base Course at Marine Barracks, Philadelphia. He was afterward ordered to the 1st Marines, with whom he participated in combat against hostile Cacos bandits at Le Trou and Fort Capois, Haiti. After his promotion to Captain in August 1916, Vandegrift was assigned to the Haitian Constabulary at Port-au-Prince, where he remained until 1918. After returning to the United States for one year, he rejoined the Constabulary in 1919. He was promoted to Major in June 1920.

Returning to China in 1935, Vandegrift served as Executive Officer and Commanding Officer of the Marine Detachment at the United States Embassy in Peiping. Promoted to Colonel in 1936, Vandegrift was ordered back to the United States and assigned to Headquarters Marine Corps in Washington, DC. From 1937 to 1940, he served as the Military Secretary to the Major General Commandant. In March 1940 he was appointed Assistant to the Major General Commandant and in the following month was advanced to Brigadier General. 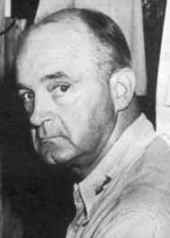 The Battle for Guadalcanal raged for several months, during which time the Marines of the First Marine Division suffered reduced rations, malaria, constant shelling from the Imperial Japanese Navy and aerial bombers, and a determined Japanese infantry consisting of 32,000 troops.[2] Vandegrift and his Marines were withdrawn from Guadalcanal and sent to Australia for rest, retraining, and refitting. While in Australia, President Franklin D. Roosevelt awarded Vandegrift our nation’s highest decoration citing, “With the adverse factors of weather, terrain, and disease making his task a difficult and hazardous undertaking, and with his command eventually including sea, land, and air forces of Army, Navy, and Marine Corps, Major General Vandegrift achieved marked success in commanding the initial landings of the U.S. Forces in the Solomon Islands and in their subsequent occupation. His tenacity, courage, and resourcefulness prevailed against a strong, determined, and experienced enemy, and the gallant fighting spirit of the men under his inspiring leadership enabled them to withstand aerial, land, and sea bombardment, to surmount all obstacles, and leave a disorganized and ravaged enemy.”

In July 1943, Vandegrift assumed command of the I Marine Amphibious Corps. Within a few scant months, the I MAC landed at Empress Augusta Bay, Bougainville, Northern Solomon Islands. After establishing a beachhead, he relinquished command of the Corps and returned to Washington, DC to assume the duties of Commandant, United States Marine Corps.

On January 1, 1944, Lieutenant General Alexander A. Vandegrift was sworn in as the 18th Commandant. He was advanced to General in March 1945—the first Marine Corps officer to achieve four-star rank. It was a stressful time. During Vandegrift’s service as Commandant, numerous institutional threats were initiated by the Department of War, the US Army, and President Harry S. Truman. It was Truman’s intent to disestablish the Marine Corps. The Naval hierarchy was sympathetic to Vandegrift, but the Navy was facing serious attacks from the Truman bureaucracy as well. Threatened with losing Naval aviation to the newly emerging US Air Force, the Navy decided it would be to their benefit to sacrifice the Marine Corps in exchange for keeping naval aviation from being consolidated with the Air Force. 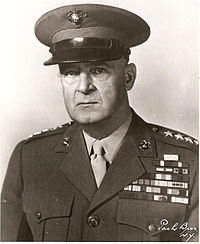 Joining with Truman, General Dwight D. Eisenhower argued that the US Army could easily absorb the roles and missions of the United States Marine Corps. What ensued was a power struggle of pro-Army interests over a much smaller post-war Marine Corps, and the Naval Establishment. Vandegrift aligned the Marine Corps with the Congress of the United States. To clinch the support of Congress, General Vandegrift presented his views to the United States Senate Committee on Naval Affairs on May 6, 1946.[3] The entire content of this presentation will appear here next week. Historians and those interesting in knowing more about our history will be fascinated by Vandegrift’s presentation.

General Vandegrift’s son was Colonel Alexander A. Vandegrift, Jr., (1911 – 1969) who also distinguished himself while serving on active duty during World War II and Korea.

[1] The First Marine Division was the first Marine Corps division to leave the shores of the United States as a fully organized infantry division.

[2] Japanese killed in action during this campaign numbered 31,000. A total of 60,000 US troops served on Guadalcanal at various times. The Marine division consisted of only 20,000 men.

[3] General Vandegrift was correct; Truman, Eisenhower, other high ranking Army brass were proved wrong when, on June 25, 1950, the US Army was unable to hold a massive assault of North Korean Army forces. Not only was the post-war Army unable to launch an effective counter attack, they were nearly pushed into the sea near Pusan, South Korea. It was the Marine Corps, not the Army, that gave Douglas MacArthur an amphibious assault at Inchon, effectively cutting off the North Korean Army, which by then were far south on the Korean Peninsula.

Next Week:  Part II —General Vandegrift’s address to the Naval Committee of the United States Senate