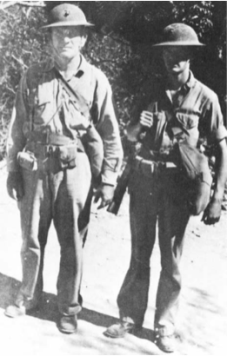 Initially, the area of responsibility assigned to 1/4 was heavily wooded and dotted with coastal artillery barracks and other buildings; by early May the entire region was completely barren of any vegetation and the buildings were mere remnants; dust a foot thick covered the entire area, the result of heavy pummeling by Japanese bombs. The Marines (a term which now includes all other assigned personnel, regardless of their service affiliation) were constantly repairing beach defenses. Enemy fire was so accurate that the troops could only be fed at night. Shown right, LtCol Curtis T. Beecher and his battalion runner.

Casualties began to mount, including the officers. Major Harry Lang, commanding Company A was killed; Captain Paul Brown and one of his platoon commanders in Company B received serious wounds. Company D lost one Marine officer and three Army officers to Japanese bombs. While Army officers were quickly appointed to command these companies, they had scant knowledge about infantry tactics or how to lead men in combat. The troops had little confidence in them, but this wouldn’t matter for very long.

Early in the evening of 5 May 1942, a Philippine civilian arrived in a small fishing boat on the beach at Corregidor. He carried a message from Philippine intelligence on Bataan. He was promptly taken to LtCol George Hamilton, the regimental intelligence officer. The message warned of a Japanese amphibious assault on the night of 5/6 May 1942. The Japanese plan was to land the 61st Infantry Regiment during the evening of 5 May, seize the airfield, and then capture Malinta Hill. A second regiment of the 4th Infantry Division would land on Morrison and Battery Points. The two forces would then join for the capture of topside.

At 2240 hours artillery shelling concentrated on the north shore beach defenses, in the sector of 1st Battalion, 4th Marines. At 2300, supplies of food and water were just reaching the beach positions when landing boats were reported offshore. Then, a second concentration of artillery pounded the beach for just under ten minutes; the barrage ended with phosphorous shells —no doubt a signal for the landing force to proceed. The landing consisted of 790 men of the 1st Battalion, 61st Infantry Regiment. Captain Lewis Pickup of Company A watched as the landing craft angled toward his company’s position. He ordered searchlights turned on and Marines began pouring fire into the landing craft with 37mm guns, machine guns, and individual rifle fire. The Japanese troops struggled in the mire created by layers of oil from the ships that had been sunk earlier. PFC Barnes and one other position were the only remaining automatic weapons of 13 positions—the rest destroyed by enemy bombardments.

First Lieutenant Bill Harris passed the word to his Marines, “Fix bayonets.” Master Gunnery Sergeant Mercurio ordered one of his Marines to go forward observe and report the location of the Japanese. When PFC Nixon got to the beach, the Japanese were only 30 yards away. In the darkness, Japanese infantry were able to by pass the Marine positions, which were spread too thin to be effective. Fighting quickly became hand-to-hand. Corporal Franklin remembered, “It was damn bloody.” A grenade went off close to Franklin, who sustained shrapnel wounds to the face and head. Stunned, he laid down on the ground and hazily saw a Japanese coming at him with a bayonet. Franklin suddenly jumped up, and with his own bayonet, attacked the Japanese soldier. Franklin received a bayonet wound to his chest, but he managed to kill his enemy. Afterward, Franklin ran up the trail past another enemy soldier, who shot him in the leg, but the Marine kept moving until he reached the safety of Malinta Hill.

8 thoughts on “On to Corregidor —Part VII”