The Marine later recounted of Fallujah, “Man … when you drove past that place, you didn’t even want to look at it. You could feel the presence of evil in there.” In November 2005, 3rd Battalion, 5th Marines (3/5) joined thousands of other coalition forces in an attack upon Fallujah. They called it Operation Phantom Fury and it was the largest combined assault since the invasion of Iraq. The attack was preceeded by warplanes attempting to pouund the city into submission, and then in a driving rain, the Marines moved in. 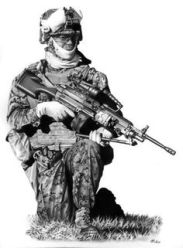 At the time, Corporal Jeremiah Workman was serving as a squad leader in a mortar platoon. For 17 days, Marines hunkered in the mud at the northwest corner of the city lobing shells at the positions of enemy insurgents. There was nothing personal to this, Workman recalled. It was a fire mission; Marines carry out their assigned mission.

By mid-December, the Marines had conquered most of Fallugah and the need for mortar fire gave way to the need for security patrols. Workman’s platoon was split into two sectoins and sent our searching houses, looking for weapons. On 22 December, the other half of the platoon found themselves in a nasty firefight and Workman recalled, “When they came back in, everyone looked as though they’d been in a fire.” The next day, Workman’s section was assigned to go out; “We all had this gut feeling that the next day, we’re gonna get in some sort of fight.”

The next morning, Workman was assigned to command ten Marines and they took the right side of the street, while Sergeant Jarrett Kraft commanded the Marines on the other side of the street. It didn’t take long before the Marines were finding weapons and ammunition, seized it, and placed it in a HUMVEE that followed along. When the Marines entered the third house, Workman heard the sound of machinegun fire from across the street. Sergeant Kraft had discovered a group of heavily armed insurgents. They had found the evil.

Workman remembered being scared for two long seconds. “It was a man check,” he said, “but I’m a corporal in the Marine Corps, and my Marines are looking for leadership.” So he led his Marines toward the sound of the guns.

Detailing some of his Marines to guard the entrance to the house, Workman entered the bulding where a lieutenant informed him that there were Marines trapped on the second floor. Workman and his Marines formed a stack behind the lieutenant at the foot of the stairwell, and on the count of three Workman ran up the steps to the first landing. His body was surrounded by the snap of lethal rounds, and when he arrived on the landing, he discovered that he was alone. None of the others had followed him up the stairs. It was a matter of miscommunication, so Workman had to go back down the stairs again, reform the stack, and make a second charge. He had almost reached the top when a grenade bounced off the stairs and exploded. Everyone was hit, but every Marine responded, “good to go.”

Workman and his Marines advanced up the stairs firing at the insurgents, who had baracaded themselves into one of the bedrooms. By then, two of the Marines he had come to rescue were laying dead and the Marines are nearly out of ammo … so they retreated to a patch just outside the house to reload. Just then, a Marine stumbled out of the yard to the house next door. “He was covered with blood —he looked like a zombie, and he just fell over.” said Workman. The corporal grabbed the Marine and dragged him down the street to where medical corpsmen were working on the wounded behind the cover of a couple of HUMVEEs. Meanwhile, insurgents began concentrating their fire from the second floor. Behind the vehicles, Workman found two Marines in his platoon; it looked like they needed medical help, so he called out to the corpsman, “Doc … get up here.”

The corpsman hollered back, “They’re okay.”

“No damn it,” Workman shouted, “Get your ass up here right now!”

“Those Marines are dead, Workman … now clear out,” the corpsman shouted back.

Workman later said, “It was the first time I had ever seen a dead Marine up close; it was as if someone flipped a switch and I was suddenly pissed off.”

Workman ran back to the house, which was now in total darkness and the air clogged with smoke. Leading a third charge up the stairs, Workman encountered a second grenade and the explosion knocked almost everyone down. Workman pulled out a grenade of his own and tossed it into the room where the insurgents remained barracaded and just then, the company commander grabbed Workman by the helmet and pulled him out of the house. An M-1A1 tank had arrived.

Vengence is mine, sayeth the Lord.

For extraordinary heroism while serving as Squad Leader, Mortar Platoon, Weapons Company, 3d Battalion, 5th Marine Regiment, Regimental Combat Team 1, 1st Marine Division, U.S. Marine Corps Forces, Central Command in support of Operation IRAQI FREEDOM on 23 December 2004. During clearing operations in Al Fallujah, Iraq, Corporal Workman displayed exceptional situational awareness while organizing his squad to enter a building to retrieve isolated Marines inside. Despite heavy resistance from enemy automatic weapons fire, and a barrage of grenades, Corporal Workman fearlessly exposed himself and laid down a base of fire that allowed the isolated Marines to escape. Outside the house, he rallied the rescued Marines and directed fire onto insurgent positions as he aided wounded Marines in a neighboring yard. After seeing these Marines to safety, he led another assault force into the building to eliminate insurgents and extract more Marines. Corporal Workman again exposed himself to enemy fire while providing cover fire for the team when an enemy grenade exploded directly in front of him causing shrapnel wounds to his arms and legs. Corporal Workman continued to provide intense fire long enough to recover additional wounded Marines and extract them from the besieged building. Although injured, he led a third assault into the building, rallying his team one last time to extract isolated Marines before M1A1 tanks arrived to support the battle. Throughout this fight, Corporal Workman’s heroic actions contributed to the elimination of 24 insurgents. By his bold leadership, wise judgment, and complete dedication to duty, Corporal Workman reflected great credit upon himself and upheld the highest traditions of the Marine Corps and the United States Naval Service.