“The thing is, helicopters are different from planes. An airplane by its nature wants to fly and if not interfered with too strongly by unusual events or by a deliberately incompetent pilot, it will fly.

“A helicopter does not want to fly. It is maintained in the air by a variety of forces and controls, working in opposition to each other; and if there is any disturbance in the delicate balance, the helicopter stops flying immediately and disastrously. There is no such thing as a gliding helicopter.

“They know if anything bad has not happened, it is about to.” 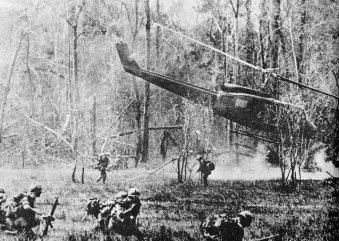 What Mr. Reasoner said is absolutely true. Piloting a helicopter takes a skill set few on this earth are capable of, but it takes even more than that to pilot it under harsh conditions. Equally difficult was the entire process of adapting this ungainly aircraft to sophisticated military operations, but the military’s success in achieving this seems apparent by the number of our warrior’s lives saved by skillfully flown helicopters, from resupplying them with much needed munitions in order to continue the fight, to evacuating our wounded to field hospitals. No matter what mission our helicopter pilots undertake, it is exceedingly dangerous work.

The process has always been evolutionary, beginning with the question, “How might we use these machines to enhance our combat capabilities?” 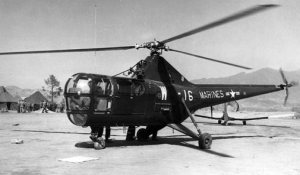 The Marines took possession of its first two helicopters on 9 February 1948. The Sikorsky HO3S was a fragile airframe with significantly limited performance parameters, but it was a start. When the Korean War broke out, Marines were scrambling to put together a provisional brigade to help shore up Army units in Korea pushed all the way south to the end of the peninsula —the Pusan Perimeter. Until the arrival of the Marines, led by Brigadier General Edward A. Craig, the Korean issue was in doubt. General Craig took with him a seriously understrength regiment, but also a Marine Air Group consisting of three fighter squadrons and one observation squadron, VMO-6. The observation squadron operated eight fixed-wing light aircraft and four HOS3-1 helicopters.

General Craig could not have been happier with these new airframes. As he later reported, “Marine Helicopters have proven invaluable. They have been used for every conceivable type of mission. The Brigade utilized helicopters for liaison, reconnaissance, evacuation of wounded, rescue of Marine flyers downed in enemy territory, observation, messenger service, guard mail at sea, posting and supplying out-guards on dominating terrain, and the resupply of small units by air.”

Nevertheless, the early helicopters were somewhat limited in their lift capability, an important lesson for Marines because of the battle of the Changjin (Chosin) Reservoir. In the frigid conditions of North Korea, early helicopters barely achieved 5,000 feet in altitude in an area where mountains reached from between 4,600 and 6,000 feet in above sea level.

In 1948, the Marines hoped to activate two assault/transport helicopter squadrons by 1954, but the Korean War accelerated this timetable by a wide margin. The Marines settled on the HOS4, an airframe severally designated for service with the Navy-Marine Corps-Coast Guard, and the Army-Air Force. Used by both the Army and Marine Corps in the Korean War, the Marines called their version of this helicopter the HRS-1.

With the Korean War now in full swing, the Marine Corps expanded its requirements from two helicopter squadrons to four; each of these would receive the HRS-1 helicopter pictured immediately above. When HMR-161 went to Korea, it had two primary missions: combat operations, and testing and evaluation of the concept for employing of vertical lift aircraft. By late 1953, the Marine Corps had more experience in helicopter operations, possessed more helicopters, more trained pilots and crewmen, than any other military organization in the world. There is a reason for this: the National Security Act of 1947 made the Marine Corps responsible for developing phases of amphibious operations that pertained to tactics, techniques, and equipment used by the landing forces. Their acquired expertise is what led Marine helicopter squadrons to Vietnam

Over the next ten years, US politicians shifted their attentions from Korea to a place hardly anyone had ever heard of: Vietnam. What was evolving there was quite complex. The French, badly defeated by the North Vietnamese forces in 1954, were going home—a fact that left the Republic of South Vietnam with a weak military posture. To help shore up the South Vietnamese defense establishment, the United States began to send mentors to help train, organize, and advise the South Vietnamese military leadership. A small number of Marines participated in joint staff, communications, and advisory roles—particularly those advising the emerging Vietnamese Marines (RVMC).

As part of the military assistance mission to South Vietnam, the United States provided Army aviation companies (helicopter). In late 1961, the Army operated two companies equipped with the Piasecki[1] H-21 tandem rotor aircraft. While capable of transporting ten fully equipped assault troops and crew, the H-21 proved only marginally suited to service in a high humidity environment, and only slightly suitable for night operations.

The problem with Admiral Felt’s recommendation was that Marine Corps pilots were not familiar with the operation of the H-21 tandem rotor helicopter, nor were Marine pilots sufficiently familiar with the Army’s aviation standardization procedures. In the meantime, an additional aviation company in Oklahoma received a warning order to begin preparing for deployment to South Vietnam.

General Harkins, having assigned the 93rd Aviation Company to Da Nang, requested cancellation of the fourth aviation company and instead asked for a Marine Corps helicopter squadron for operations within the Mekong Delta. “When the tempo of operations permit, the Marine Corps squadron will be relocated to I Corps and the 93rd Company to III Corps,” Harkins said.

Rapid deployment is what Marines do for a living, so it was no surprise to learn that there were two squadrons available to General Harkins within a very short time. The first was HMM 362[2] (Marine Medium Helicopter Squadron 362). HMM-362 had been part of the Special Landing Force (SLF) aboard the USS Princeton (LPH-5) patrolling the South China Sea. HMM-261 was also available, but ordered to an emergency deployment in Thailand.

HMM-362 became the lead element of OPERATION SHUFLY, arriving at Soc Trang, south of the city of Saigon, for operations in the Mekong Delta on 15 April 1962. The squadron lifted their first troops into battle on 22 April 1962 —the first Marine Corps combat unit to serve in Vietnam. Before their re-designation in 1969, HMM-362 participated in operations at Ky Ha, Marble Mountain, Hue, and Phu Bai. They also supported operations from the sea while serving aboard the USS Iwo Jima (LPH-2), USS Okinawa (LPH-3), and USS Princeton (CV-37/LPH-5). 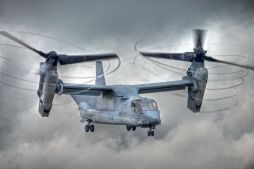 If Mr. Reasoner thought helicopters were different sixty-six years ago, then they have become more so since 2005 when the Marine Corps accepted their first V-22 Osprey. The first two squadrons of this type of aircraft were designated Marine Medium Tilt-rotor Squadron (VMM)-263 and VMM-266.

[1] Frank Piasecki (1918-2008) was an aeronautical engineer and the man that pioneered tandem rotor helicopter designs and developed the concept of vectored thrust through the use of a ducted propeller.

[2] HMM-362 would later receive the CH 53 helicopter and the new designation HMH. They called themselves the Ugly Angels.

12 thoughts on “About Helicopters”