A book by Bing West 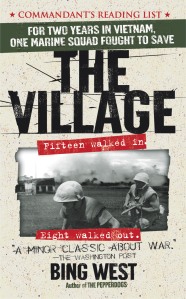 To some, the Vietnam War was a chance for medals, promotions, and even perhaps, one day someone would pin a star on their shoulder. To most, serving in Vietnam was their duty —a patriotic chore to serve their country. Along the way, a student of the Vietnam War will find countless demonstrations of raw courage and heroism: servicemen of all of our Armed Forces, giving of themselves for a greater purpose. Of course, nearly sixty thousand of our young men gave the ultimate sacrifice. Many more gave up their limbs, or suffered debilitating wounds —and from a psychological perspective, everyone left a part of themselves in Vietnam, including a squad of Marines assigned to protect the Vietnamese people living in a small coastal village, then named Binh Nghia, two kilometers south of Chu Lai.

This is a remarkable story told to us by former Marine Captain Francis J. “Bing” West, who later served as an assistant to the Secretary of Defense, and in the Reagan Administration as an Under-secretary of Defense. When Bing West returned to Binh Nghia 37 years later, he found an extraordinary thing: many of the villagers from 1966-1967 had died —particularly those who served alongside the Marines; some married and moved away from the village —and yet in spite of this, everyone living in the village in 2003 could recount stories about “their American Marines,” or, Thủy quân lục chiến Mỹ

You see, over the years, the villagers passed down the stories of what happened in Binh Nghia to their children, then they told the stories to their children. Everyone knew what happened, and as Mr. West walked through the village in 2003, one old farmer came to him and asked, “Tell me Dai U’y where is Sergeant Mac? Do you know Bill … Marines number one, what happened to Monty? What happened to Frill (Phil)?” Not far away Mr. Bing found a marker resting between two palm trees, and on it a small inscription to the Marines who had built their well and shrine in 1967.

Herein lies the true pain of the Vietnam War. Young Americans went to Vietnam to fight a vicious and resourceful enemy. A few of these people ended up protecting a few thousand residents of a small village along the coast in Quang Ngai province. Most of the Marines cherished these simple people so much that they ended up dying for them. In return, the villagers ended up adopting these Marines; they remember their sacrifices even today. If only the American people had loved these Marines as much.

The Village is a worthwhile book, on many different levels.

8 thoughts on “The Village”