It must have been about 0600.  While reveille was supposed to “go” at 06, most of the troop handlers got their trainees up earlier because there was always so much to do, and so little time in a day to get it all done.

Looking out from the company office (S Company, 1st Infantry Training Regiment  (ITR)) I could barely see in the dark winter morning the long lines stretched behind the laundry trucks. 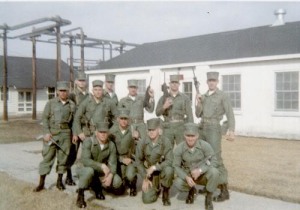 Note of explanation: In 1964, most Marines in the Fleet Marine Force and training units wore sateen utilities, the prescribed uniform for work in the field.  Marines being meticulous about almost everything had their utilities washed, starched and pressed at local laundries.  These laundries did a thriving business aboard the huge Marine Base (Camp Lejeune) located cheek by jowl with the (then) small town of Jacksonville, NC.  Six days a week laundry trucks would come to many locales on the base and thousands of Marines would line up to turn in dirty utilities and then in a day or two line up again in the early hours to pay for clean, starched and pressed uniforms.

This had been going on for some years and I had not heard any complaints.  But then, I suddenly did begin to hear grumbles.  I was a Sergeant with seven years service, and most of my trainees, having recently completed recruit training at Parris Island, were now in NC for the follow on combat training with a variety of weapons.  These very long days often ended late a night. The mission of troop handlers was to ensure nothing interfered with our mission of training Marines.  Trainees had to be in their designated classes, which were always in the field, on time. This frequently meant speedily marching Marines for more than an hour. Trainees also had to receive their meals on time. Accounting for all hands was a constant. The list of necessary tasks is too long to include here, but suffice to say that I would be “riding herd” on over two-hundred young Marines for most of the day.

Here is where my story takes a twist: the above paragraph generally describes what transpired in all training companies at the 1st ITR, but our company was unique. While the 200 Marine trainees to a company was the rule, Company “S” was an exception. Our company commander and first sergeant commanded up to 1,200 Marines in training—about the same strength one might find in an over-strength infantry battalion. The reason for this is that S Company was responsible for training Six Month Reservists. These were young men who joined the Marines, performed six months of active duty, and then spent the rest of their enlistments back home at a Marine Corps Reserve Training Center. Each year, these Marines would serve an additional 14 days of active duty for training. In time of war, they would augment the regular Marine Corps. For some, it was an acceptable alternative to the draft.

The reader must now imagine that the Duty Troop Handler would be dealing with a huge number of trainees in the very early morning and late at night.  The rest of the troop handlers would arrive in time to supervise the cleaning of barracks, morning muster, marching Marines to the mess hall, and ensure that all hands were properly uniformed and equipped for training prescribed for that day. Troop handlers would accomplish all of these things before morning colors, at 0800.

In addition to essential combat training, Marines at ITR are transitioning from their experiences at boot camp and the real Marine Corps. Their brains need re-wiring, so to speak. At this stage of a Marine’s service we want them obedient to older, more experienced noncommissioned officers without the trauma associated with boot camp.  Of course, Marine Corps drill instructors are legendary—and for most Marines, scary fellows. The NCOs in regular units are not supposed to be scary to anyone. They are more like older brothers.

Still, our trainees were always in a rush. Returning now to the laundry trucks, our young fellows would rush to the back of the laundry trucks, form a line, and wait to turn in or receive back their uniforms. The laundry employee (mostly the driver) would take the laundry ticket, disappear into the van for a moment or two, and then inform our Marines that he could not find their uniforms: check back tomorrow. As there were always long lines of Marines waiting their turn, it was standard for the young Marine to mutter “Okay” before heading back to the company area. He did not have the time to argue or demand that the laundry driver check again.

Well, folks, I hope you see where this is going.

As a Sergeant, I had more time and was at least a bit less in awe of my elders.  Furthermore, civilians hardly ever make a good impression on sergeants. By this time in my career, I had already served as an Admiral’s orderly aboard an aircraft carrier on the West Coast, had sailed to many of the more well known ports in Asia during my first hitch (3 years) and then on re-enlisting for four more years, I was trained and then served at two Embassies in Europe (Rome and Oslo).  While I was hardly a crusty veteran, I had dealt with high-ranking officials in the military and diplomatic corps.  Naturally, most of the young trainees thought I was “old” and were in awe of nearly anyone with more than one stripe of a PFC.

Now my story turns again.  I was standing at the window of the company office, drinking a mug of coffee, observing the massive movement of trainees running between their barracks and separate heads, and a huge dirt parking lot where the laundry trucks were parked. There were two trucks —which is important to my story; two trucks, two laundry companies, providing the exact same service. There were enough trainees for more than one company. This was capitalism at its finest.

Several of the more mature trainees who were also billet holders (acting as NCOs within the training platoons) approached me. They informed me that at one of the laundry trucks too many trainees were not having their laundry returned. The situation imposed a significant hardship for low paid young Marines.  I had no idea why they were not getting their utilities back, but I was going to find out.

I walked out into the crisp (that is code for too cold) air and headed for the laundry trucks. Trainees were leaping out of my way in the darkness, and I approached the back of the truck, which was the point of sale.  The trainees went from loud talking to a quiet murmur.  The civilian truck driver suddenly realized that someone other than trainees was present.  I know, a buck Sergeant is hardly a colonel or general, but in these circumstances, a Sergeant was a “big stick”.  I identified myself and asked why so many Marines were not getting their uniforms back.  It went back and forth a bit without rancor.  After, a minute or two of verbal fast dancing by the truck driver, my voice increased a few octaves, my words a bit more clipped.  He could see that things were not going his way.  He moved just a bit closer to me and lowering his voice said, “Look, Sergeant, I will take care of this.  I will see what the trouble is and….listen…you bring your utilities to me and I’ll have them done free.  OK?”  I am not sure those were the exact words, but it was close.  The laundry was stealing or destroying young Marines uniforms and not compensating them because they knew that could get away with it.  And then when confronted by a junior NCO speaking in their behalf, the driver attempted to bribe said junior NCO, also known as me.

I looked at him for two seconds and responded: “Right, why don’t we drive over to the Provost Marshal’s office right now and you can repeat what you just told me to Duty Provost Sergeant?”  Well, he went very quickly into the “Oh, no.  You misunderstand.  I wasn’t wanting to do anything wrong here.  I want to make sure these Marines get what they paid for and —.”

Well, I knew and he knew that I knew that he was a lying snake and he suspected that nothing good was going to come from messing around with me.  I jumped back down out of the back of the truck and saw that many trainees had gathered around and had witnessed the entire event.  I walked calmly (outward appearance is important) back to the company office.

As I entered the office, I noted that some of the other troop handlers had arrived; I told them the story.  I also told them my plan.

After getting them all together, we agreed as to what was to be done.

Troop handlers would talk to their troops and suggest that they boycott the offending laundry company. Yes, the line would be twice as long behind the competitor, but we would compensate for that. We knew that the trainees would pass along the story of how their NCOs were taking care of them. We were empowering the Marines, and they liked it.

The next morning, in the dark, the line forming behind the offending laundry truck was much shorter than it was behind his competitor. The day after that, the line shrank even more. By the fourth or fifth day, the truck operated by the lying snake no longer came to Camp Geiger. He realized that his days were over at the 1st Infantry Training Regiment.

I have no idea how long ITR Marines boycotted the dishonest company. I know it lasted for a few more months. The company lost a lot of money—in 1964 dollars—but readers ought to know that this kind of treatment of young servicemen goes on far too much.  Good officers and good NCOs are alert to it and they talk with their young charges and warn them of the dangers of dealing with the all too friendly people that surround most military bases. I received a few accolades from the other troop handlers, and some of the more daring trainees offered their thanks.