The island of Hispaniola has a long and troubled history. Spanish colonization disposed of the native inhabitants and imported African slaves in their place. In 1697, the French took over the western one-third of the island and christened it Haiti—an area consisting of 11,000 square miles, three-quarters of which is mountainous interior, the rest being coastal plain. The primary products of Haiti were coffee, sugar, and other cash crops. By 1791, Haiti had a population of 25,000 whites, 30,000 free mulattoes, and 500,000 black slaves and their French masters did not treat them well, or wisely. The slaves rebelled, and over ten years of conflict, reduced the free inhabitants of Haiti by 70 percent —including all whites. Due to a long procession of rebellions and Coup d’état the nation never again achieved any degree of prosperity.

Haitian mulattoes advantaged their status under colonial rule, maintained French culture, and governed the country, but the real power brokers were the Cacos—lawless rural blacks who formed gangs and intimidated everyone with their violence. Wealthy political hacks often paid the Cacos to do their bidding. Meanwhile, mulattoes and Cacos abandoned most of Haiti’s citizens to languish in the squalor of their depressing slums.

The foregoing describes the political and economic environment into which young Private Lewis B. Puller arrived in 1919. From the vantage point of a naval vessel approaching the Haitian coast, the island was exciting to behold. There were white stucco buildings with red Spanish tile roofs, which contrasted with lush forests in the background. This favorable impression changed quickly, however, as the ship neared the coastal region, where the fresh sea breeze transformed into a revoltingly pungent odor.

During the period between 1908 and 1915, the Haitian government changed hands seven times. Four incumbent presidents left office in coffins and it was thus that convinced President Woodrow Wilson (D) to send a brigade of 2,000 Marines to “restore order and protect American interests.” Clever diplomats convinced the Haitian government to sign a treaty, which effectively made Haiti a protectorate of the United States. Consequently, Haitian politics stabilized.

The Marine Corps role in Haiti was to perform as a constabulary. Marine officers and NCOs provided experience and political neutrality needed to help reorganize the Haitian national police and military. To accomplish this, Marine NCOs received commissions and Gendarmerie lieutenants, while officers served in billets two or three grades higher than their American rank. Marines assigned to the Gendarmerie received a salary from the Haitian government in addition to the pay as U. S. Marines. For a corporal working as a constabulary lieutenant, the extra $720.00 per year more than doubled his Marine Corps pay. 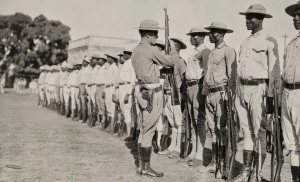 Not all Marines served well in these billets. Some brought with them their prejudices toward blacks and there were language difficulties owing to the fact that most Americans did not speak French. By 1919, Marine commanders shipped out nearly a third of the Marines assigned to the constabulary due to their unsatisfactory performance in this unusual “independent” duty. There was nothing remotely similar between the normal duties of a Marine Corps officer or NCO and that of a member of the Haitian Gendarmerie. In addition to pacification duty, young Marines also exercised civil powers. They enforced the law, supervised the jails, prepared criminal cases for courts, approved all local government transactions, and paid local government employees. Young Marines also supervised education programs, directed sanitation efforts, agricultural pursuits, and all military construction projects within his area of responsibility.

Private Puller became part of the Gendarmerie not long after his arrival in Haiti. His on the job training consisted of observing the interaction between Haitian NCOs and the common constables; his captain instructed him to learn to speak and understand Creole. He learned that in order to be successful in this assignment, it would be necessary that he learn local customs and traditions. For example, one new twist to military life was that Haitian wives accompanied the men, seeing to all of their needs. The decisions that Puller would make about his men would affect their wives and children, also. 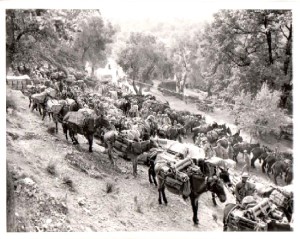 Upon Private Puller’s arrival in Haiti, his superiors assigned him to the Gendarmerie. His on the job training consisted of “observing” the Haitian NCOs drill their subordinates and what he saw amazed him. The black NCOs used long wooden rods to strike the head of any soldier whose drill performance was substandard—he may have wondered how it was possible to generate loyalty and devotion from subordinates when their leaders abused them. In any case, his first duty was to provide security for mule-trains transporting supplies to inland units. Within a week, Puller took charge of the supply run to Mirebalais and Las Cohobas, small towns located within Cacos infested countryside. With 25-armed escorts, Puller led his mule train out of Port Au Prince toward his objectives 40 miles distant. Without accurate maps, he had only a verbal description of the route to guide him; his troops spoke no English. He had no previous experience with mule trains, and so he set upon a quick pace of march.

Late in the afternoon, Puller’s small force surprised a column of about 100 Cacos moving in the opposite direction. Without hesitation, Puller ordered a charge into the enemy force, and even though his troops did not understand a word of English, they followed their aggressive leader. Several of the Cacos were shot and killed, and the rest scattered. This was “Chesty” Puller’s first armed confrontation with an enemy and it taught him a valuable lesson that he would take with him for the balance of his career: courage and coolness under fire, aggressive action, leading from the front of the line. Nevertheless, in spite of these attributes, Private Puller’s first mission was not an unqualified success: he would have to learn how to better manage and care for the pack mules that suffered under Puller’s grueling pace.