Smedley Darlington Butler may not be a name most parents would choose for their first-born son, and it is certainly not a name that most people are familiar with —and yet, next to “Chesty” Puller, Smedley Butler remains one of the most colorful officers in the history of the United States Marine Corps.

Smedley was born in West Chester, Pennsylvania on 30 July 1881—the eldest of three sons.  His father, descended from Quaker families, was a lawyer, a judge, and for 32 years, a congressman and Chair of the House Naval Affairs Committee during the Harding and Coolidge administrations.  His grandfather was Smedley Darlington, a Republican congressman from 1887 to 1891.

Butler attended The Haverford School, a secondary academy popular among upper class Philadelphia families.  He was a Haverford athlete, becoming captain of the baseball team, and quarterback of the football team.  Against the wishes of his father, he left the school a few weeks before his 17th birthday to offer his services to the Marine Corps during the Spanish-American War; nevertheless, Haverford awarded him his high school diploma.

On the day of this moments decision, Butler went directly to the Marine Corps headquarters where he was able to see the Colonel Commandant Charles Heywood [1], and thereupon applied for a commission as a second lieutenant.  Colonel Heywood looked steadily at Butler and said, “I spoke with your father the other day, and he told me you are only 16 years of age.”  Butler replied, “He often gets me and my brother confused sir.  I’m actually 18 years old.”  Heywood continued to eye the young man but then finally relented.  “Okay, we’ll take you.”  Both of these men knew that one of them was lying.

Butler trained at the Marine Barracks in Washington DC.  In July 1898, he went to Guantanamo Bay, Cuba arriving shortly after its invasion and capture.  His company soon returned to the United States and, after a short break, Butler was assigned to the armored cruiser USS New York for a period of about four months.  He was mustered out of the Marine Corps in February 1899, but in April of that year, he was offered and accepted a commission as first lieutenant in the regular Marine Corps. 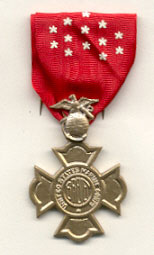 After service in the Philippines (1899-1900), Butler was assigned to a company commanded by the famous Littleton Waller whose orders were to proceed to China and relieve the siege of Peking.  It became known as the Boxer Rebellion.  Butler was ordered to Tientsin, where he served with honor and received his first gunshot wound.  Since at that time officers could not receive the Medal of Honor, Butler was promoted to Captain by brevet for distinguished conduct and public service in the presence of the enemy.  He was later awarded the Brevet Medal, one of only 20 Marines to receive it.

From 1901 to 1912, Butler served at various post in the United States, in Puerto Rico and Panama.  Afterward, he commanded an expeditionary battalion in Nicaragua and several other locations during the so-called Banana Wars.  In 1914, Butler participated in the pacification of Vera Cruz, Mexico, form which he became eligible for and received his first Medal of Honor, “For distinguished conduct in battle, engagement of Vera Cruz, 22 April 1914.  Major Butler was eminent and conspicuous in command of his battalion.  He exhibited courage and skill in leading his men through the action of the 22nd and in the final occupation of the city.”  Butler returned the medal to Marine headquarters, explaining that he had done nothing to earn it, but the medal was returned to him with terse order to retain the medal, and to wear it.

Butler was awarded his second Medal of Honor (the only Marine officer to receive two) for “extraordinary heroism in action while serving as Commanding Officer” of detached companies in Haiti on 17 November 1915.

Upon return to the United States in 1919, Butler was promoted to Brigadier General and served as Commanding General, Marine Barracks, Quantico, Virginia until 1924.  In 1924, Butler was granted a two-year leave of absence from the Marine Corps to accept the post of Director of Public Safety in Philadelphia, Pennsylvania.  He resumed his duty at Quantico in 1926 until assuming command of the 3rd Marine Brigade in China, 1927 through 1931.  Upon return to the United States, he retired upon his own application after 33 years of active duty service.

After retirement, Major General Butler became outspoken against war profiteering—for sending young Americans out to die to further corporate interests.  He was also opposed to Herbert Hoover, who directed Douglas MacArthur to disperse the so-called bonus army.  The veterans, he argued, had as much right to petition congress as did any American corporation.

In November 1934, Butler reported to members of congress the existence of a conspiracy by prominent capitalists, including JP Morgan, DuPont, and Goodyear Tire, to overthrow President Franklin D. Roosevelt and install in place of duly elected government, a fascist regime headed by Hugh S. Johnson, a former official in the National Recovery Administration.  A special committee of the House of Representatives was convened, headed by Representative John W. McCormack [2] (D-MA), and Samuel Dickstein [3] (D-NY) who took General Butler’s testimony in secret.  The principal organizer of this movement was said to be Grayson Murphy [4].  The committee’s initial report stated that General Butler’s statements could not be confirmed.  No prosecutions or further investigations followed Butler’s testimony and the press made great light of Butler’s story and did what they could to discredit him.  However, the committee’s final report credited much of Butler’s testimony as “alarmingly true.”  Still, no one was ever prosecuted for conspiracy to overthrow the U. S. government.

General Butler died from what might have been pancreatic cancer at his home on 21 June 1940.  He was 58 years old.

[1] Heywood was promoted to Brigadier General in March 1899; he later became the first Marine officer promoted to major general.

[3] According to Allen Weinstein and Alexander Vassiliev in 1999, records of the USSR reflect that Dickstein was a paid employee of the NKVD, precursor of the KGB.  An article in the Boston Globe stated, “Dickstein ran a lucrative trade in illegal visas for Soviet operatives before brashly offering to spy for the NKVD, in return for cash.”  His NKVD nickname was “Crook.”

[5] Special annotation: there are conflicting accounts about how Butler earned the nickname “Old gimlet eye.”  Two of these accounts suggest the possibility that he suffered from malaria (although at two different locations and at different times: Honduras 1903 and Nicaragua 1912).  Another supposition is that Butler suffered from jaundice, one indicator of a diseased liver.  Still another theory retains the liver as the source of his red, bloodshot eyes, suggesting it cause was related to too much alcohol consumption.