Years ago I had the privilege of meeting an elderly gentleman who I will call Henry. Henry lived alone in a modest Air Stream trailer in Central Florida. He needed the company, and I enjoyed hearing his stories from his younger days. He spent most of his adult life working on the railroad, although I can no longer remember which one—it was up north, though. I found his stories fascinating because when I was a youngster, I loved trains and thought that perhaps one day I would become a train engineer.

Apparently, Henry and my grandfather had something in common. Both were U. S. Army veterans of World War I. As I never knew my grandfather, Henry’s stories fascinated me. My grandfather was a regular soldier; Henry had been drafted into the Army in early 1917. In those days, not too many people volunteered for military service. Listening to Henry describe his experiences in basic training took me back to my own experience at Parris Island, South Carolina 46-years later. How many hours did we sit on buckets and clean our weapons? It seemed like thousands of hours … and it seemed like that to Henry, too.

Suddenly, basic training was over. The United States was gearing up to enter the war, but there was some confusion about how to do that. The allied powers had to come to some agreement about whose flag American troops would fight under, and under whose command. Since the battlefields were in France, the French wanted all allied forces fighting under their command. This makes perfect sense: economy of force and unity of command are important concepts, but no American politician was going to send in an American to fight under some other country’s flag. As the heavyweights dickered back and forth, the foot soldier performed close order drill, and he sat on his bucket and cleaned his piece.

Henry told me, “One day this fella approached our sergeant, who was not an altogether friendly sort, and after a few moments the sergeant ordered us to ‘listen up’ to what this fellow had to say. Well, this fellow was a major, so we all paid attention. He told us the Army was moving away from using horses in combat to those new-fangled automobiles. Called them trucks, but the way he explained it, they was automobiles that the Army was converting to vehicles that could carry cargo, including men. He was looking for soldiers who wanted to learn about these trucks.

“Well, I raised my hand because I was tired of sitting on my damn bucket. The sergeant gave me this dirty look, but the major was happy to have me and one other fella. Shortly after that, we got orders and found ourselves on the other side of the base at Fort Monmouth and we were learning about trucks. For two full weeks, we learned about how these machines worked, then we drove them for another week, and then finally we were designated motor transportation men. 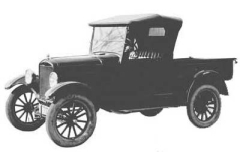 “Come time to leave for Europe and we all crowded on transport ships. This was no fancy cruise. They had us stacked on that ship, and as soon as one fella got seasick, so did a few more and let me tell you, it was a mess. In any case, in due time, we arrived in France and we went through several days of fooling around trying to figure out which way was which … and then finally a sergeant told me to report over to this captain who was in charge of transportation. So that’s what I did.

“I reported to the top sergeant and he said to wait to see the captain. So I waited around until the captain was ready to see me and then I reported to him. And he asked me, ‘Well son, what can you do?’

‘I know about trucks,’ I told him.

“So I explained that they was automobiles that could carry cargo and such. He laughed and said, ‘Well okay young man … we don’t have any of those trucks, but I’ll tell you want we do have. We have mules. You go on over to see Sergeant McKinley, and you tell him that you know how to fix trucks.’

“So that’s what I did. And during the Great War, Sergeant McKinley had me shoveling mule shit. But I’ll tell you, it was a damn sight better than that hell that was the front line war.”

Of course, the amazing thing about Henry’s story is that the personnel classification and assignment policies of the modern day military in the early 1960s were not much different from what he experienced. If you’re out there Henry, I remember and relish the memory of our time together.